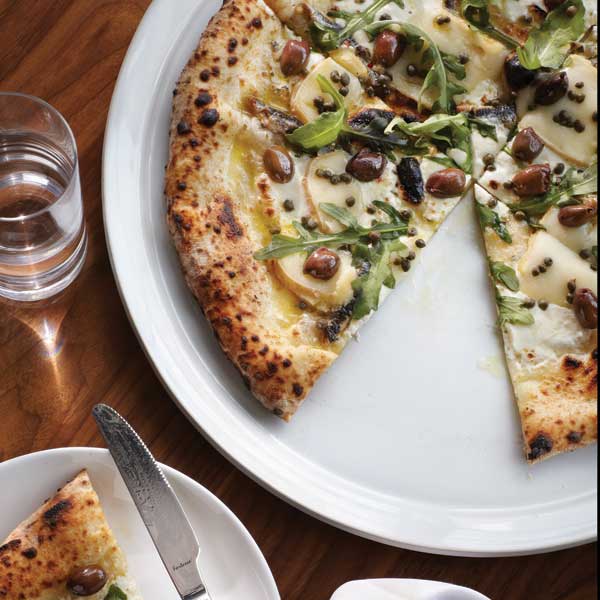 Luxury dining is a given in Buckhead, where you can’t throw a Bentley hood ornament without hitting an expense-account steakhouse, a mall or hotel that houses white-tablecloth heavyweights, or one of Pano Karatassos’s 1990s holdouts still serving Southwestern Caesars or seafood Newburg (looking at you, Nava and Atlanta Fish Market).

But what about quality midscale options—the casual haunts that won’t decimate your credit line, where you can linger over food made by cooks who value individuality? Lunchtime lines trail out the doors of Jennifer Levison’s fast, informal hits, Souper Jenny and Cafe Jonah. Devouring lemony salads and lamb kebabs doused with yogurt on the wobbly tables at hidden Cafe Agora on East Paces Ferry feels like a secret thrill. But more refined, middle-of-the-road independents are scarce.

Which is why STG Trattoria comes as a revelation. Its combination of smart cocktails, breezy design, deftly seasoned small plates, and ambitious pizzas and pastas (priced in the teens) helps fill the glaring hole in the Buckhead jigsaw.

Brian Lewis shrewdly strategized his second Atlanta restaurant. His first, Bocado, opened in Westside in 2009, when that area—which now overflows with dining options—was still a culinary tabula rasa. Bocado snagged the role as Westside’s first true neighborhood hangout with its winning formula: clever sandwiches at lunch, affordable appetizers and mains that showcase the seasons at dinner, a burger worthy of cult status, and eventually a destination cocktail program.

Having mastered the art of the neighborhood draw, Lewis noticed the void in Buckhead. He decided to differentiate his second baby by giving it an Italian bent that features the dish of the moment: Neapolitan-style pizza baked in Acunto ovens, the same infernos that give Antico Pizza Napoletana its ballyhooed char.

I wouldn’t blame trend-trolling gastronomes for muttering, “That’s sooo done.” But Lewis has staffed the kitchen with marquee talent who take STG far beyond the typical pizza joint. (The restaurant’s name sounds unfortunately close to STK, the Midtown steakhouse, but it stands for the names of Lewis’s three sons.) Executive chef Josh Hopkins, formerly of Abattoir, and chef de cuisine Adam Waller, previously at Sotto Sotto, signed on early. Lewis found a bonus hire in pasta savant Bruce Logue, who left La Pietra Cucina and is maintaining his chops at STG while he plots his own restaurant.

I expect this place to soon attract crowds that will keep it perpetually thronged—but first they have to discover it. Nearly every person I arrange to meet here calls my cell exasperated and asks, “Where is this place?” It’s at the far end of a new shopping center, a former Mercedes-Benz dealership, on West Paces Ferry Road, next to the St. Regis Atlanta and across from 103 West. Look for the sky-blue sign of the Flywheel cycling gym at the center’s entrance.

When you walk in, the restaurant’s eccentric foyer resembles an age-worn cellar with a curved brick ceiling, flanked with rows of mounted wine bottles. The effect is a little cheesy, honestly, but then the space opens into a fresh, minimalist expanse. Attractively cracked, polished concrete floors (this was once the mechanic’s garage) and a wall covered with what looks like chain-linked fence, an art installation of sorts, lend gritty urban contrast to soothing walnut paneling and the semiopen kitchen’s marble tile backsplash. A square bar of communal seating with stools on either side of the counter anchors the room, but most people gravitate to individual tables until the restaurant fills.

Perhaps the entryway put you in the mood for vino; hold off and order a cocktail first. David Durnell, Bocado’s ace young bartender, designed a drink list around amari—Italian herbal liqueurs traditionally consumed as aperitifs or digestifs. That sounds esoteric, but trust me, these beauties come laced with the familiar zest of citrus and a splash of soda, and they make ideal summer sipping. The Cynar Lime Soda (Cynar is a liqueur fashioned in part from artichokes) has a mild, alluring bitterness that marries well with salad, one of the most daunting dishes to pair with booze. If you’re skittish, wade in with the limey My Amaro Cola, a next-gen rum and Coke. And when you are ready for wine, one of the cheerful servers proffers an iPad (early visitors, note: They’ve worked out the bugs) with helpful links to demystify Italian varietals and regions.

With cocktails or wine, I want to start my meal with newfangled bruschetta. No oily chopped tomatoes breathing garlic over soggy toast here: A springy creation when the restaurant opened in April featured a fluffy spread of pureed English peas atop crackly bread that also held drapes of prosciutto, homemade mozzarella, and minced rosemary. The variation crowned with veal tongue and anchovies, a menu standard, has a beguiling pungency that reminds me of vitello tonnato, the classic Italian dish of chilled, sliced braised veal tenderloin with a creamy sauce that includes tuna.

Salads of soft lettuces and gentle vinaigrettes in the menu’s small plate section are lovely, but gravitate to seafood for the most provocative flavors. Braised octopus teeters pleasingly between chewy and buttery, and smoked paprika gives it a flash of heat. Black bass rests in a broth charged with the salty, sweet, and sour nip of preserved lemon, a canny foil to cut the bitterness of the accompanying rapini.

As for pastas: I’ve tasted sublime lamb agnolotti in the shape of rectangular packages, dulcet tortelloni with spring vegetables in mushroom broth, and a rich tangle of linguine and shrimp in a white wine–butter sauce speckled with herbs. Though they are beautifully composed, I notice that most of the sauces on the pastas are surprisingly tame: They speak more to the predilections of Hopkins, who takes the lead on dough recipes and ingredient combinations, than Logue, who comes from the Mario Batali school of Italian pyrotechnics. With such a creative force in the kitchen, why not let Logue, arguably the finest pasta maker working in Atlanta restaurants, take the lead occasionally and deliver some spicy, garlicky dynamism?

The pizzas certainly speak out. Hopkins aims to separate his efforts from the competition’s by taking a traditional approach to crust—aged for thirty hours to achieve a sourdoughlike tang, formed with a fulsome lip, baked until the edges are handsomely singed—but then adorning the pies with toppings that veer more to inventive than classic. A version with tomato, ricotta, and meatballs, for example, also includes oil-cured olives for a sodium surprise attack. Fresh mint takes the usual place of honor from basil on a pizza with lamb sausage and crumbly ricotta salata. I love the potent jumble on another that includes anchovies, capers, olives, and arugula, but I wish the Taleggio also mentioned in the description gave off more of a whiff: If we’re ordering this bad boy, we want maximum funk.

I remember that when Bocado opened, I yearned for a bit more punch to the cooking as well. It came with time. Lewis likes to start cautiously with abbreviated menus and friendly flavors, gradually winning customers over. He’s already taken the biggest risk, though, by invading the land of Bone’s and Houston’s and introducing a happy medium of cost and free-minded cooking. May it spark an insurgency of midpriced Buckhead revolutionaries that shakes the old guard to the core. —Bill Addison

Photograph by Greg Dupree. This review originally appeared in our July 2012 issue.