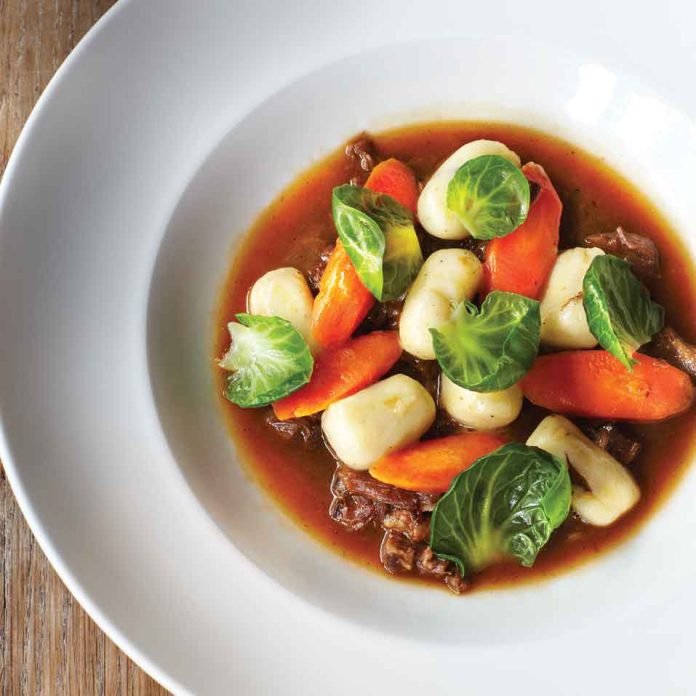 Last October, my best eating buddy passed away unexpectedly. I could count on Leon to stomach four barbecue joints during an afternoon research blitz, don a jacket and tie for dinner at Quinones at Bacchanalia, and debate the fine points of artisan gins over late-night cocktails. A native Atlantan, Leon gamely explored the fringes of his hometown, accepting impromptu invites to try Oaxacan moles in Jonesboro or Korean monkfish stew in Duluth. We kept a running tally of foods we thought the city lacked; for Leon, who was Jewish, an exceptional deli-style Reuben sandwich topped the list. He thought the Star Provisions version got it nearly right—though the corned beef didn’t quite tower high enough and the Russian dressing was a tad too gloppy.

So it was with a rush of sadness and joy that I chomped into the Reuben at the General Muir. Thickly sliced beef, sinus- clearing sauerkraut, Gruyère rather than Swiss cheese for a nuttier edge, crisp rye bread, just enough dressing: I know Leon would have approved.

The General Muir’s co-owners, Ben and Jennifer Johnson, also run West Egg Cafe, where crowds waiting for tables at breakfast and weekend brunch often spill onto Howell Mill Road’s sidewalk. Cousins Properties, which operates the new Emory Point complex on Clifton Road, asked the Johnsons if they wanted to open a second location, but the two weren’t looking to exactly duplicate their first venture. They read an interview with Todd Ginsberg, then chef at Bocado, on the Jewish Daily Forward blog. Ginsberg grew up in New Jersey and confessed in the piece that he aspired to one day open a deli. The Johnsons approached Ginsberg: Was he ready to make that goal a reality?

With Shelley Sweet, West Egg’s general manager, also on board as a partner, the General Muir launched in late January. It takes its moniker from the ship that pulled into New York harbor in 1949 carrying Jennifer Johnson’s grandparents, both Holocaust survivors, and her mother, born in a displaced persons camp after World War II. The name informs the restaurant’s tone: familial, and respectful of the past but with an eye on new horizons.

It’s tricky to label the place, actually. “Jewish deli” doesn’t comprise the gamut of its ambitions. Yes, the counter in the back of the space sells “appetizing”—the word used to describe whitefish salads, lox, and cream cheese bagel schmears—as well as treats like sweet noodle kugel, a gloriously moist sour cream coffee cake, and lemony black and white cookies. And the dining room shines with white tile that evokes New York subway stations. The light streaming through the high windows, though, dispels any geographical illusions: That kind of pure sunshine would never filter down with such intensity amid Manhattan’s skyscrapers.

Though Ginsberg takes many of his cues from delicatessen fare, he’s really drawing from the whole of the Jewish diaspora: the chopped liver, matzo ball soup, potato latkes, and cheesecakes from the Ashkenazi style of cooking that developed in Eastern Europe, and also the Sephardic school that echoes the cuisines of Mediterranean, Middle Eastern, and even Asian Jews. The kitchen makes no overtures to obey the dietary laws of Kashrut—the Reuben, for example, combines meat and dairy, which is definitely not kosher—yet neither does it serve pork or shellfish, foods forbidden to an Orthodox regimen. It all makes for a fascinating, refreshing entry into a culinary culture that’s underexplored in Atlanta. And it’s all the more thrilling for how exquisite the food tastes right from the get-go.

Breakfast and brunch most eloquently convey the restaurant’s raison d’être. Bring a group and plow into the Maven, a platter splayed with drapes of pale orange lox (cured salmon) and nova (smoked salmon), squares of sable (delicately smoked black cod), and creamy salmon salad. The montage comes with only one bagel, so order extras—and request them toasted—to pile on fish layered with schmears (in flavors like horseradish-dill) and garnishes like tomato slices and capers for acidic pop. Bravo to pastry chef Lauren Raymond for executing such compact, glossy bagels, a rarity in Atlanta.

A dish like Fish and Potatoes reveals the evolution of Ginsberg as a chef. Slices of smoked salmon lie atop remarkably thin latkes (lacy potato pancakes) nestled over a splotch of sour cream as thick as icing. Atop the fish rests a thatch of arugula and tart matchsticks of Granny Smith apple—a substitute for applesauce latkes’ traditional sidekick. The soothing flavors and textures pull at the heartstrings, yet the interplay of ingredients displays uncanny engineering. For years Ginsberg worked the line in fine-dining kitchens (among them Alain Ducasse at the Essex House in New York and the Dining Room at the Ritz-Carlton, Buckhead) before becoming executive chef at neighborly, midscale Bocado. There he mastered small plates—this summer I’ll long for his salad of sliced peaches, pickled blueberries, duck ham, and pistachio-arugula pesto—and created a sensation with his double-patty burger. At the General Muir his background coalesces as the foods of his childhood gain polish without losing their essence. This is full-circle cooking; Ginsberg has found his true métier.

Also savor the Smoked Hash, a fetching hodgepodge of potatoes, eggs sunny-side up, caramelized onions, cabbage, and peppers with cubes of crisped pastrami—tempting morsels that also show up in the restaurant’s scarf-worthy riff on poutine (fries doused with gravy and cheese curds), served at lunch and dinner. The noontime and evening menus both include the stellar Reuben and a pastrami sandwich that delivers the same primal satisfaction as a forkful of smoked brisket.

Dinner showcases Ginsberg’s most subtle compositions. The masterstroke thus far is prune-filled gnocchi in oxtail ragu, a combination that alludes to the Jewish predilection for meat and fruit pairings with roots in both medieval Europe and ancient Persia. Ginsberg’s main course list is short and in flux, with experiments like lamb shank tossed with pappardelle and accented with North African flourishes like harissa and spiced yogurt. There is, of course, a variation on a double-stack burger, this one gussied up with Russian dressing and an onion roll. I remember how the dinner menu at Bocado grew more daring as Ginsberg settled in, and I expect the same here. Go for the no-brainer dessert: a wedge of Raymond’s cheesecake that is mystically dense yet fluffy.

Dinners can be relatively quiet. At breakfast and lunch, though, the crowds from Emory, the CDC, and nearby neighborhoods already fill the place with the familiar rhythms of a community haven: the clamor of voices and the click of spoons, the charge of caffeine and the appeasement of hunger. The General Muir is instantly a place I want to bring pals. It’s also where I’ll have an occasional solo meal at the long front bar, clutching a Reuben in both hands and remembering one particular friend with whom I wish I could still share my sandwich. —Bill Addison

Photograph by Greg Dupree. This article originally appeared in our May 2013 issue.