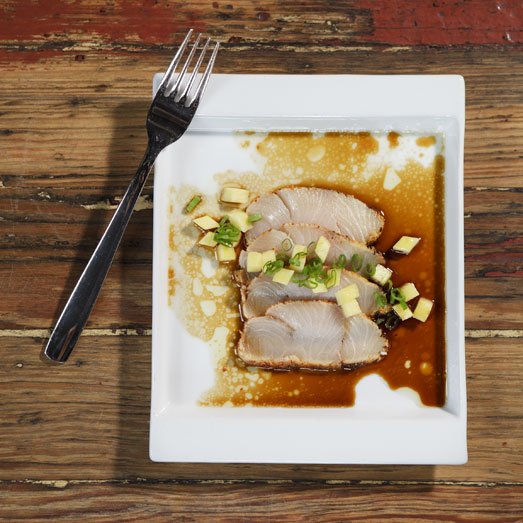 There is no sign out front to announce the location of the Sound Table, the new restaurant-club from the owners of Midtown’s Top Flr. “The Sound Table” is etched on the side of its building, perched at the intersection of Edgewood Avenue and Boulevard in the Old Fourth Ward, but the words pale next to a stately mural of Martin Luther King Jr.’s visage. Park in the scruffy lot next to the building, then walk around to the front and pull open the black door flanked by large windows.
Your ears register the place before your eyes adjust to the dimness. A lush seventies groove may shimmy in the air, or perhaps a tight synthesizer drumbeat circa 1984.

Stairs lead to a second-floor dining area that accommodates the weekend throngs, but on weekdays all the dinnertime action happens in the room straight ahead. A long bar fills the right side of the space. Bottles glint with labels of titillating liquors that go way beyond the standard Bombay Sapphire and Jim Beam. Opposite is a raised platform with tables and a softly backlit wooden bench against a craggy brick wall. Light fixtures that resemble glowing test tubes dangle in the air. Toward the rear is an open DJ booth, its back panel painted the bright green of a golf course fairway.

I’ll admit, the first time I strolled in here, I thought, “Is this place just a little too funkadelic for Tuesday night supper?” Then I ordered the Horse’s Neck, a cocktail that mingles bourbon, three kinds of bitters (Peychaud’s, Angostura, and Regans’ Orange), and ginger beer. Its sophisticated flavors bounced among sweet, spicy, and herbal without straying too far in any one direction. I grabbed creamy, crispy Belgian-style frites, swiping one after another through silky homemade mayonnaise. My doubts began to subside.
After four visits, I’m an enthusiastic convert, particularly when I think back to the predecessors of this kind of scenester haunt—the cacophonous monsters that dominated the Atlanta restaurant landscape five years ago. Buckhead’s Twist, Midtown’s Shout, and Two Urban Licks on Ralph McGill are model examples. Mobs would descend on them so furiously that waits could stretch past an hour and callers requesting reservations would have to scream into the phone to be heard. Servers slung fruity martinis and fried calamari with crazed speed. The experience usually felt indifferent amid the madness.
Those party venues remain, and they have their loyalists. How gratifying, though, that when the splurge mentality began to fade a few years back, an overdue breed of smaller, more individualistic restaurants began to emerge. Top Flr, owned by Darren Carr and Jeff Myers, helped lead the way when it opened in 2007. Staunchly affordable, the menu remains quirky but smart. (Tuna tartar with miso pesto, avocado, and lime aioli over Sardinian flatbread? It works.) The place appeals to hipsters, and it flaunts distinctive elements—a mod layout, an engaging staff, tranquilizing sound tracks that mesh genres, a provocative wine list with far-flung options—that forge a sense of intimacy.
The Sound Table follows a similar philosophy. Carr and Myers run the place with a third partner, DJ Karl Injex, and though the spinning of tunes does play a key role in its dynamic, the decibels don’t typically climb to distracting levels until prime dinner hours are past. The cocktail list here is longer than at Top Flr, and the menu is shorter and more focused on small plates, but the Sound Table’s close interplay between food and drink makes for a sexy tango—particularly because both aspects impress equally.
Subheads on the cocktail list help you decide among the twenty-five or so optionss. “Sours, Citrus & Coolers,” for instance, guides you toward concoctions such as the Gemini Handshake, made with cachaça (the sugarcane liquor used to make Caipirinhas), lime, Angostura bitters, and a jolt of pineapple-habanero jam. If drinks are like personality tests, I seem to fall in the “Strong, Rich & Strange” category. A favorite is The Only William, a variation on a Manhattan with the addition of absinthe to keep things psychedelic. And then there are the tiki drinks. Mystic River, a blend of three rums with house-made rum punch and grenadine, is sheer danger in a glass. Take a cab if you intend to drink more than one.
These mad-scientist libations—as well as the wine selection, which is concise but gilded with affordable Old World champs—meld seamlessly with the nibbles that dominate much of the menu. Don’t think of this as merely bar food, though. Executive chef Shane Devereux (who also oversees Top Flr’s kitchen) and chef de cuisine Brendan Keenan look to world cuisines and their own imaginations for inspiration, but most dishes showcase surprisingly refined qualities.

Alongside those frites, I typically start with a bowl of crunchy-soft fried chickpeas. The chefs constantly tinker with the offerings: Previously, the chickpeas were tossed with lemon and capers; recently, the kitchen added sweet, dusky curried spices to the dish. Counteract the fried heaviness with a spread of white anchovies and olives marinated with coriander seed and orange zest.

Several plates take smart liberties with Asian and Latin American themes. A riff on goi ga (Vietnamese chicken salad) includes plenty of shredded cabbage and slivers of chicken tossed in a citrusy dressing with mint and the familiar sweetness of Georgia pecans. The kitchen’s take on Vietnamese pho first incorporated oxtail, and the broth turned out a little too salty. Now the pho includes roasted pork, and though it doesn’t taste as traditional as the more customary beef, it satisfies soulfully. Oaxacan hanger steak—marinated with arbol chiles and sauced with pico de gallo—isn’t as complex or smoky as the food I associate with Oaxaca, but the cooks render that hanger cut more tender than most I encounter around town.
I only tried two dishes I’d not order again: seared scallops on a bland bed of green papaya, and a dry chocolate truffle cake (go for the sticky toffee pudding with honeyed yogurt instead). But don’t let minor mistakes deter you. The Sound Table’s stylish, of-the-moment vibe marks another notch in the slow revolution toward neighborhood restaurants that reflect the diverse personalities of the city. Let’s keep that groove going. —Bill Addison
The Sound Table
RATING **
483 Edgewood Avenue
404-835-2534
thesoundtable.com
HOURS Dinner Monday–Saturday 6–11 p.m.

Photograph by Christopher T. Martin. This review originally appeared in our October 2010 issue.