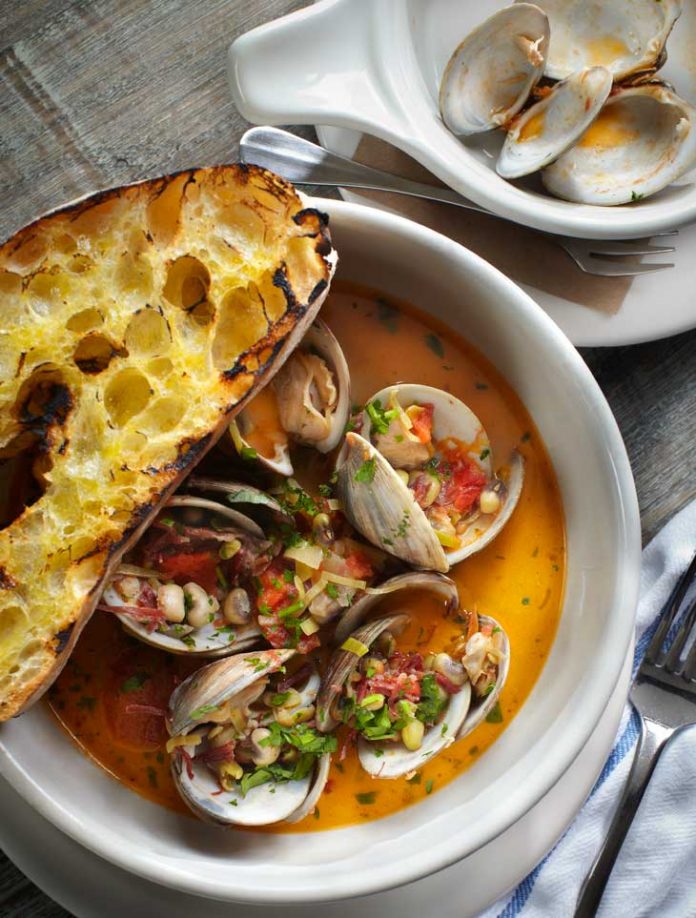 At 5:50 p.m. on a Wednesday, I’ve sidled up to the four-sided bar at Watershed on Peachtree to wait for a plate of fried chicken. Several couples and solo diners already have the once-a-week special in front of them: We know to arrive early before the chicken runs out (usually long before eight o’clock). Many of us mastered this routine at the original Decatur Watershed, which closed last August after a thirteen-year run. There the chicken, which earned so much press it practically needed its own agent, was served on Tuesday evenings.

Its mystique endures at the restaurant’s new south Buckhead location, at the base of the Brookwood Condominium building. But don’t expect nostalgic allusions to the old spot. The move is part of a deliberate reboot of the Watershed brand.

Decatur’s converted-garage funkiness has been traded for a polished space designed by Smith Hanes, who’s made his reputation by giving Ford Fry’s restaurants (particularly his latest, the Optimist) understated elegance.

Watershed’s dining room—with its high ceilings, beige color scheme, and rows of lights covered in bell jars—exudes the studied neutrality of a museum cafe. The bar has spunkier character. Hanes evokes a rustic, nautical feel through varied use of woods: Pecan planks with subtle gradations of pinks, tans, and grays stretch across an angled ceiling; grainy oak covers the floors; tables are made of ash with a smoky hue; and the bar itself is fashioned from one big fissured sycamore, its edges buffed but undulating.

The only visual acknowledgment to the past is a hanging quilt embroidered with an abbreviated version of the chicken recipe—bathe in brine and buttermilk, simmer in lard and butter flavored with country ham—created by longtime Watershed executive chef Scott Peacock (who departed from the restaurant in 2010) and his late mentor Edna Lewis, the African American chef, cookbook author, and Southern food preservationist.

The new biscuits are larger, more dense and flaky than Peacock’s powdery rounds. These remind me of homier versions of what you’d get from Popeye’s, and I don’t mean that as an insult. The chicken has the texture I remember—the coating sheer and crackly, not overly battered—though the flavor, while rich, lacks the porky undertone from the ham-infused frying fat that used to come through so clearly. Still, this undeniably remains among the area’s finest fried chicken.

None of these shifts in style or address surprise me. I miss the heartfelt purity of Peacock’s Southern cooking, so rare in our dining scene, but it was time for Watershed to reinvent itself. Owners Ross Jones and Indigo Girl Emily Saliers hired Joe Truex as executive chef and partner after Peacock’s exit, and the transition wasn’t easy. Truex’s experimental, globally influenced approach, which worked so well at his previous restaurant, Repast, clashed with the Peacock holdovers; it made for a schizophrenic dining experience, and it confused customers.

In fresh digs, free of the lingering shadows and with all but a handful of the old standby dishes expunged, Truex’s talents finally shine. He’s hardly a regional traditionalist: Hawaiian tuna poke was a special one recent evening. And though Austrians first settled in Georgia in the 1730s, I doubt those immigrants would have recognized their culture in a breaded jumbo sea scallop “schnitzel” topped with a fried quail egg. But his pan-Southern cuisine has charisma and connects with the Atlanta audience, as steady, enthusiastic crowds in the new space confirm.

Start with shareable snacks and appetizers. Nibble catfish goujonettes—essentially gussied-up fish sticks with a side of spicy slaw—while sipping a glass of Champagne or sparkling rosé from the succinct but diverse wine list. Embrace the calories with hunks of pork belly painted with cane syrup, which you wrap in Bibb lettuce leaves and then swipe through a mixture of Dijon mustard and soy sauce. Slurp roasted oysters given a pungent, sophisticated bump from anchovy-lemon butter.

Truex and his chef de cuisine, Julia LeRoy (who most recently ran the short-lived LeRoy’s Fried Chicken), execute a menu that effortlessly glides between uptown and down-home. Sapelo clams sit submerged in a tomatoey broth with soft, earthy lady peas and floating threads of meat from smoked ham hocks, a humble but brilliant interplay between sea and land. Salmon tartare in soy vinaigrette comes across much tonier, dressed with chives, jalapeño, and, for crunch, Indian pappadams.

A Berkshire pork chop is no-nonsense pleasure, surrounded with sauteed okra, a sprinkling of crushed peanuts, and bacon jam whose texture reminds me of deviled ham. Chicken-fried steak is an unpretentious slab of pounded beef with a crust that properly adheres and a side of collards that taste honest and right. Joe’s Jambalaya takes a classic dish out of Truex’s native Louisiana and puts it in finer-dining context: Each element—plump shrimp, fried oysters, grilled Andouille sausage, blackened sea scallops, a crawfish etouffee slicking the bottom of the bowl—is cooked separately and then carefully arranged together. Where’s the all-important rice? Paired with crab, fried into a croquette, and posed among the seafood as nattily as Sinatra in a fedora.

Tellingly the only real missteps are efforts that harken back to the former Watershed. The vegetable plate—once a simple, seasonal glory accompanied by custardy cornbread—can be muddled and fussy, a collection of frequently changing sides often creamed or over-seasoned and topped with crumbly, pimento cheese–shellacked cornbread. And in a move that seems nothing short of passive-aggressive, the kitchen takes the signature Very Good Chocolate Cake and crams it needlessly into a glass jar. What exactly was wrong with a beautiful, glossy wedge? Such a presentation is much more appropriate for the Mess, a trifle-like concoction of wine-soaked sponge cake, custard cream, pecans, macerated cherries, and bits of meringue that two of us scraped clean.

The message is clear: Truex has proven himself a success on Peachtree Road. Let the past be the past. Owners, cooks, customers, and even critics are content to move forward . . . unless, of course, there’s fried chicken involved. —Bill Addison

Photographs by Greg DuPree. This review originally appeared in our October 2012 issue.