Home Tennessee Where to eat, sleep, and shop in the twin cities of Bristol,...

“Bristol: A good place to live,” proclaims a giant glowing sign arching over State Street. In 1921, citizens of Bristol, Tennessee, and Bristol, Virginia, voted for the modest slogan. A century later, Bristol’s also a good place to visit, thanks to boutique hotels, lots of local shopping, and an interactive museum celebrating music history.

State Street straddles the twin cities, and state flags proudly declare which side you’re in at any given moment. But Bristol still feels cohesive—rich with a sense of community and a reverence for its past, with dazzling art deco theaters, repurposed historical buildings, and kitschy ’50s flair. Home to a major NASCAR speedway and known as the Birthplace of Country Music, Bristol embodies classic small-town charm while also laying claim to a growing number of nationally recognized spots for shopping, sightseeing, drinking, and dining.

Rest Your Head
The Bristol Hotel opened in 2018 to much acclaim. (Last year, Travel + Leisure named it the number 10 hotel in the country.) Rooms are decked out in bold patterns and bright modern art, and its rooftop bar—named the most beautiful bar in Virginia by Architectural Digest—features spectacular mountain views.

Taste Test
Winner of USA Today’s Best New Craft Distillery of 2020, Lost State Distilling produces whiskey, rum, vodka, and gin made with nearly all locally sourced ingredients from start to finish. Sample some liquor and get a tour of the family-run operation housed in a century-old former wheat-grinding facility and warehouse.

Music Notes
Visit the Birthplace of Country Music Museum to find out why Bristol is considered the epicenter of country music’s “Big Bang.” Check out interactive exhibits, including a recording booth where visitors can rehearse country tunes and styles (including yodeling!) then record their own version.

Order Up
A Bristol institution, Burger Bar is known for being the last place Hank Williams Sr. was seen alive in 1952. Stop by the old-school diner for chocolate milkshakes and juicy burgers, many of which are named after Williams’s hits. (Don’t miss the Howlin’ at the Moon burger, made with chili, grilled onions, and cheese.)

Sugar Rush
Donuts are the specialty at Blackbird Bakery, but you’ll also find an impressive range of other treats (cookies, pies, ice cream, and more). The cozy living room atmosphere and coffee bar beckon guests to stay a while.

This article appears in the Fall/Winter 2021 issue of Southbound. 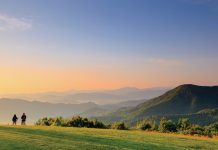