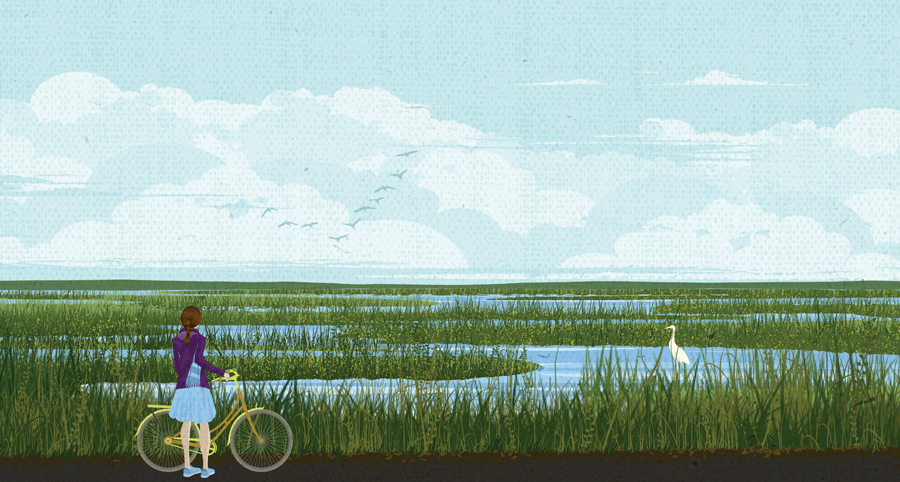 It’s been forty years since I first rode my bike from Savannah to Tybee Island, following U.S. 80 headlong into the realm of the tidal marshes. When I saw them—10,000 waving stalks of golden and green light, rustling and whistling in the sea air—I felt so stunned by the majesty that the front wheel of my bike wobbled and I veered onto the road’s sandy shoulder. The muddy ground gleamed with salt water and sparkled with merry little rivulets, and there were prickly shrubs and low, knotted-looking trees in the distance.

I glanced back down the road I’d traveled from Savannah, wondering why everything on my ride here seemed so ordinary—industrial warehouses with American flags out front, a billboard for a pest-control company, a brick ranch house, a power station. Out West, aren’t there signs like “Grand Canyon, 12 miles” or “Painted Desert, 106 miles”? Here, nothing gave a clue that I was about to encounter the sublime.

Cars blew past and the slender stems of the various grasses—cordgrass, needlerush, glasswort—politely leaned backward, like moviegoers standing to admit latecomers to their row. When tractor-trailers roared by, the grasses laid flat, twitching. Saw palmettos rattled their sharp leaves, as if inconvenienced. A thousand fiddler crabs disappeared into their holes and waited, then came back out into busy metropolises. The grasses returned to their upright position, swishing their skirts in sunny unconcern as they have done since the age of dinosaurs.

I thought of David Young’s poem to his wife, which begins: “I guess your beauty doesn’t bother you, you wear it easy.” It could be Georgia speaking to its 100-mile-long, half-a-million-acre coastline of silver-gold marshland, the largest expanse in the country. In my 1991 nonfiction book, Praying for Sheetrock, the salt marsh was practically a character: “The primeval home of every shy and ticklish, tentacle-waving form of sea-life and mud-life, the coastal Georgia salt marsh is one of Earth’s rare moist and sunny places where life loves to experiment,” I wrote.

Melissa Fay Greene is the author of six nonfiction books, including Praying for Sheetrock, The Temple Bombing, and No Biking in the House Without a Helmet. Her newest, The Underdogs, is an expansion of “Wonder Dog,” a 2012 New York Times Magazine story, which became one of the most shared nytimes.com articles of the year. Greene’s work has been translated into fifteen languages and honored with a Guggenheim Fellowship, two National Book Award nominations, and a National Book Critics Circle Award nomination. Greene and her husband live in Atlanta and are the parents of nine.