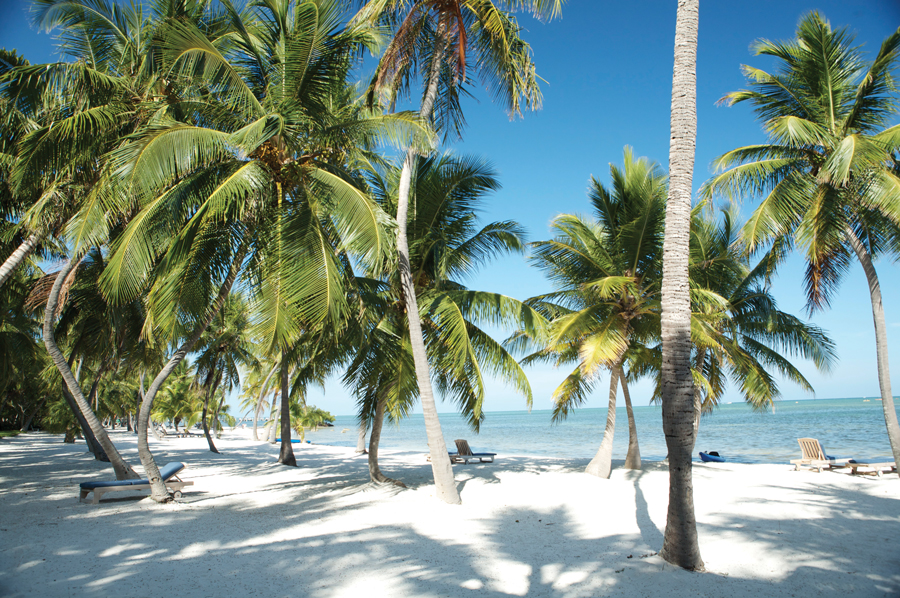 Islamorada sits between Miami and Key West, roughly eighty miles from each—and a world away from both. During my rollicking younger years, I spent plenty of time in the South Florida party capitals flanking Islamorada, but those days are done. I’ve grown older, given over the oontz-oontz of the club scene for the shush-and-clack of palm fronds. More significantly, I finally bade farewell to bachelorhood a few years ago on the eve of my fortieth birthday. I packed away my Peter Pan existence and cut loose the Lost Boys in favor of a constant companion. Still, I came late to coupling, and while I wouldn’t go so far as to say I’m romantically impaired, I’m certainly no Casanova, so every little bit of magic helps. Fortunately for me—and Whitney, my better half—full-on enchantment comes standard on Islamorada.

The island—really a twenty-mile-long “village” of islands strung together by the Overseas Highway—began casting its spell upon our arrival at the Moorings Village and Spa, a secluded eighteen-acre resort set on a former coconut plantation. As soon as we’d settled into Eyster Villa, a two-story cottage decorated in classic coastal style, we set out to explore the property. Meandering footpaths connect the resort’s eighteen cottages to tennis courts, a large, heated lap pool, and the star of the show: an 1,100-foot stretch of private, white-sand beach shaded by swaying coconut palms. (It’s a favorite location for big-budget photo shoots for glossy magazines such as Vogue and Elle.) We took our time, wandering through a lush tropical forest of banyan, mango, Key lime, and star fruit trees studded with orchids; though the resort was fully booked, we rarely encountered other guests. The setting is every bit Eden—but for the fact guests are encouraged to eat the fruit that hangs from the trees—and we were loath to leave the property, even for a few hours (many guests don’t). But the island’s other attractions beckoned, so bolstered by the knowledge that we’d only be gone a few hours, we hopped in the car and headed back to the highway.

Just a few miles south of the Moorings, Robbie’s of Islamorada draws crowds to its roadside marina and open-air market on the northern shore of Lower Matecumbe Key. Many come to book fishing charters (Islamorada is known as the Sportfishing Capital of the World), heritage tours of neighboring Indian Key, or Champagne sunset cruises on Florida Bay. Others stop in to browse the palm-shaded tents and tiki huts for souvenirs: carved-coconut monkey banks, shark-tooth necklaces, and an array of seashells.

We’d come to feed the tarpon. A bucket of five baitfish is three bucks, but Whitney would have paid $500 to record what happened next: One of the six-foot monsters exploded from the water, scaring me so badly that I screamed, leapt back a foot, and dropped my fish on the dock, where it was quickly scooped up by a lumbering pelican. After gathering my wits—and giving the stink-eye to a couple of still-snickering kids—I marveled as Whitney finished the feeding with nary a flinch. Wanting to contribute something, I bought us a pair of matching “I Fed the Tarpon” mugs.

From Robbie’s, we rolled north to Rain Barrel Artisan Village. The small assemblage of rustic cottages and charming shacks set in a tropical garden is home to working studios, whimsical gift shops, and galleries representing more than 100 painters, potters, photographers, sculptors, and jewelers. We could easily have spent hours browsing, but the day was waning and, as guests of the Moorings, we’d scored a table on the beach at Morada Bay Beach Cafe and Bar, just across the street from the resort.

We arrived in time to relax over frozen cocktails and the alternating strains of bossa nova and the Buena Vista Social Club. From our front-row seats, we marveled again at the turquoise and jade waters stretching to the horizon and waited for the show. As the sun began its descent, tiki torches blazed and dinner was served. While we worked our way through crispy Bahamian conch fritters, grilled Florida lobster tail, and coconut rice, day began giving over to darkness. We watched as the white-gold sky dimmed, thickened to bands of sherbet and salmon and plum, then hardened into an indigo dome shot through with stars. Soon the moon, round and bright, would begin its climb. I looked over at Whitney and wondered again at my luck finding a friend on the other side of Neverland. Then as if on cue, a cover of “Is This Love?” carried across the starlit beach, and I reminded myself that none of this was luck—it was magic.

Situated atop a giant salt column jutting out of the marsh, Jefferson Island overlooks the waters of Louisiana’s delta country. The small, privately owned destination is named for former resident Joseph Jefferson, a famous American actor of the nineteenth century who was best known for playing Rip Van Winkle thousands of times around the world. Today, the island welcomes romance seekers to explore its quiet splendor. Tour Jefferson’s 1870 mansion, a twenty-two-room stunner surrounded by ancient oaks. After marveling at the mansion’s unique architecture (a combination of Moorish, Steamboat Gothic, French, and Southern Plantation styles), stroll the surrounding Rip Van Winkle Gardens, a subtropical paradise dotted with fountains and filled with peacocks. Have lunch in the on-site cafe, which features a glassed-in porch overlooking the gardens. Carry the romance into the night with a stay in one of the island’s well-appointed Acadian cottages. iberiatravel.com/jefferson-island