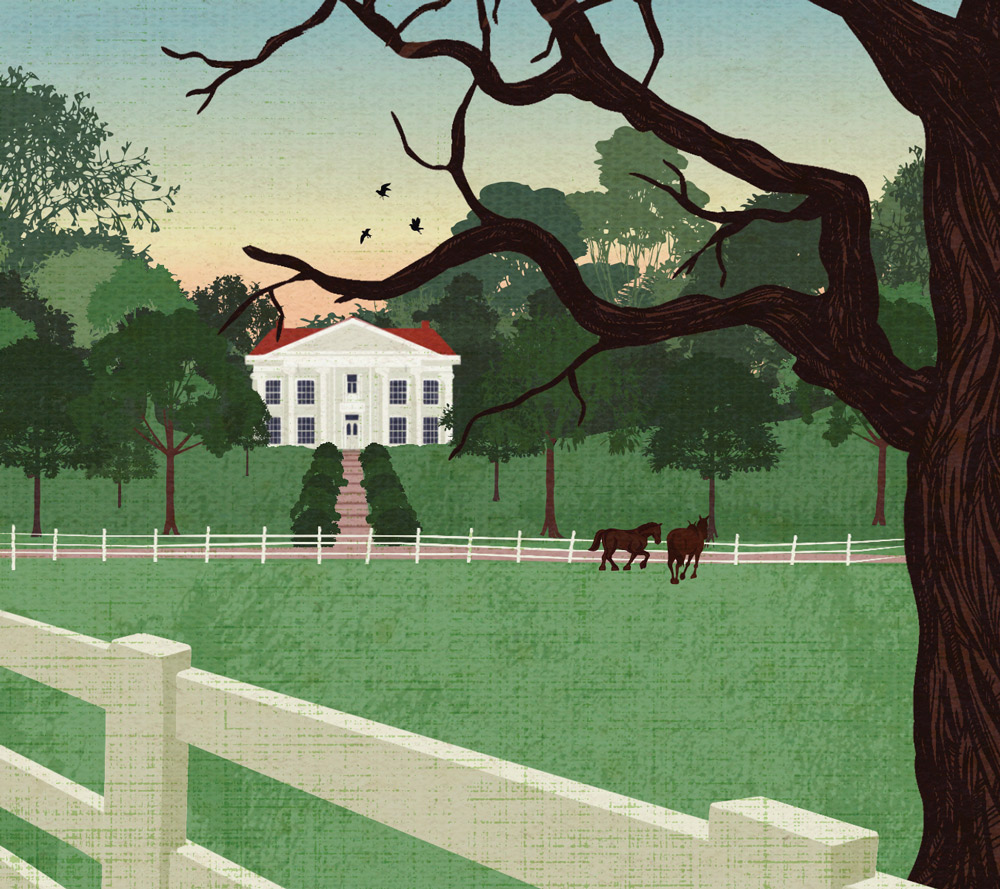 Not long after I was born, my grandfather bought a farm near La Grange, Tennessee. It is the place where I learned to sit a horse, where I first handled a shotgun. It’s where I earned my first paycheck: five dollars for mucking stalls. I must’ve been about eight years old. I’m hesitant to call it a plantation because of all that the word implies, but let’s be honest: The place has a name—Woodlawn—and a historical pedigree, serving as a hospital for both sides during the Civil War.

Driving in, the first thing you see is a white plank fence, grazing horses. Then you crest a gentle rise and there it is—portico, tin roof, big oaks, and a gravel drive, matching barns, riding ring. In college, I brought some friends to Woodlawn, and when the house came into view, a girl in my backseat blurted, “Good Lord, it’s Tara.” No doubt it looks the part.

I grew up in Mobile, Alabama, but we made regular pilgrimages to Woodlawn, most memorably on Labor Day weekends. First cousins, second cousins, third, the crowd swelling with grandchildren, great-grandchildren. Older cousins brought boyfriends, so they might be properly vetted. In due course, I invited the woman who would become my wife. There was horseback riding. A catfish fry. Touch football. I remember once, when I was a kid, the dads raced surreys around the track like a scene out of Ben-Hur. Those weekends were family epics, highlighted by quail hunts in the morning and dove hunts every afternoon, the fruits of which were served with grits and gravy that same night.

The family got so big that Woodlawn couldn’t hold us and we spilled into La Grange, occupying the La Grange Inn, composed of restored railroad houses snugged up against the tracks. The whole town is listed on the National Register of Historic Places. Literally. Stately old homes with stately old names. The porches alone are worth a look. There’s an antique shop and an antique cemetery and an antique Episcopal church, where my first cousin was married, a horse-drawn carriage bearing her down the road to Woodlawn for the reception.

By the time my grandparents were gone, my mother’s oldest brother owned the farm, and to his credit, he kept those Labor Day weekends going, long enough that my daughters were able to participate. But eventually, for too many reasons to name, the tradition petered out.

This past September, however, I called my sister to propose a return. I then rang my aunt and uncle, who welcomed the idea. It emerged, during our plan-making, that they intended to put Woodlawn on the market, an unhappy notion but all the more reason to get back.

We met, my sister’s family and mine, in early October. The horses were gone, but that approach was the same—the fence, the field, the rise. Most familiar was the smell: old wood, gun oil. Instead of horses, we rode four wheelers. We did a scaled-down version of past hunts, bagging just enough quail for a meal with grits and gravy. I’d worried the children might be bored in the country, but they snooped in the barns, hiked the fields, collected railroad spikes, and set pennies on the tracks. Took pictures with their phones. They soaked it in as if they understood what had been gained by our coming, what would be lost. On our final morning, a couple in a Mercedes motored up, wanting to know the asking price. The house wasn’t on the market yet, but apparently word was out.

Michael Knight is the author of the novels The Typist and Divining Rod, the short story collections Goodnight, Nobody and Dogfight and Other Stories, and the book of novellas The Holiday Season. His short stories have appeared in The New Yorker, Oxford American, Paris Review, and The Southern Review. His new collection of linked stories, Eveningland, was released earlier this year. Knight teaches creative writing at the University of Tennessee and lives in Knoxville with his family.