All things are relative, I guess. Our staff quickly discovered that this is the case when it comes to identifying small towns. I’d say I grew up in a small town. In the 1970s and eighties, Gainesville, Georgia, was home to fewer than 20,000 people—which is the ceiling we ultimately placed on towns we were considering for inclusion in our cover feature. However, I recognize that those who hail from truly tiny hamlets, where the population has never broken out of the triple digits, would argue that my hometown was anything but small.

While it’s tough to reach consensus on the question of size, there’s far less disagreement on the subject of small-town spirit. Whether a community’s population tops out around 650, like Leiper’s Fork, Tennessee, or swells to almost 19,000, like Thomasville, Georgia, the standouts tend to share a handful of qualities: an embrace of local traditions; a commitment to maintaining long-standing structures and landmarks; and a genuine affection for local characters. It’s these charms, along with a slower pace, a welcoming air, and an abiding sense of familiarity that draw visitors to the storied small towns of the South. We’re pleased to present eight of our favorites, profiled by award-winning writer Tony Rehagen.

Of course, small towns don’t hold a monopoly on civic pride and respect for tradition. Freelance writer Thomas Swick visited Tampa’s historic Ybor City, where he met with a number of locals dedicated to sharing the stories and culture of this immigrant neighborhood once hailed as the “Cigar Capital of the World.” And Executive Editor Allison Entrekin discovered how the people of Chattanooga, in just a few decades, transformed their city from one of the nation’s most polluted to one of its greenest—as well as a top destination for outdoor recreation. Tag along with her as she climbs boulders in Little Rock City, kayaks on the Tennessee River, and hang glides high above Lookout Valley.

Whether you’re planning a quiet escape or plotting an adventurous getaway, I hope your warm-weather travels take you to some great new destinations—regardless of their size. 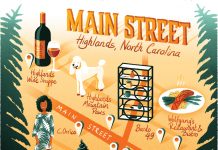 Highlands, North Carolina’s Main Street is a gathering place for locals and a sweet escape for visitors