I’m behind the wheel of a bright-white Porsche 911 Carrera S worth roughly $150,000. It’s a beautiful Saturday in Atlanta, and I’m ready to tear up the track. I nose the car up to what’s known as the launch. Beside me sits my coach, a chatty, sandy-haired Aussie named Craig Duffy. He’s informed me that, in the event of a crash, not bending my knees could snap each bone from ankle to hip. “When I say go,” Craig instructs, “stomp down and floor it—all 420 horsepower.” After a beat, he yells, “Make some noise! Hit it!” 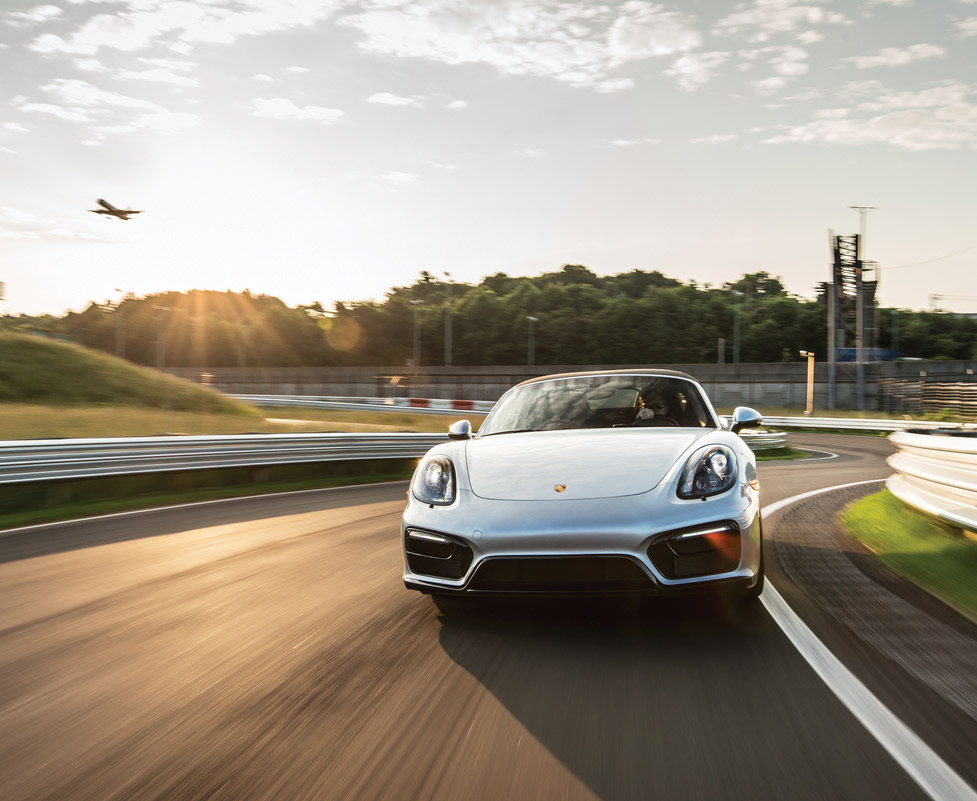 For me, this directive is glorious. I’ve always driven sporty cars: two eight-cylinder Mustangs (one smashed), a manual Eclipse, and currently a MINI Countryman S. But those are turtles. The 911 is a tiger. And the Porsche Experience Center might as well post a sign: Welcome to the Jungle.

Craig and I are hurtling down a short straightaway at north of ninety miles per hour when he barks, “Brake! Harder!” The sudden change in G-force pulls my cheeks off my teeth. The 911’s ability to fire itself from a cannon and abruptly stop with hardly a screech is incredible. It devours the course.

A few minutes later, I flunk spin-and-recover techniques on the kick plate, a black-ice simulator. Then I put the Porsche fully sideways while moving forward—drifting, that is—on both the low-friction circle and snaky-road module. We zip through the slalom and burn laps around the perimeter’s one-mile handling circuit, which mimics a European country road with elevation changes and plenty of corners, as Craig shouts stuff like: “Go from this line, straight to that line, turn it tight! Brake! Go!”

During our final laps, I realize I’m not exactly the same guy who climbed in the car an hour and a half ago. I’ve gotten a feel for the machine’s dynamics and grip, its willingness to follow my vision. In short, I’ve become one with a vehicle so prohibitively expensive that buying the tires alone would cause me to default on my kids’ daycare payments. But that’s not the point.

After my last turn, I leave the track and walk next door to have a gander at ancillary public attractions in the Porsche building, a popular filming locale that recently served as Tony Stark’s Iron Man headquarters. Inside, I check out the simulator racing lab, the viewable workshop where expert mechanics toil, Restaurant 365 (named for the first Porsche), and my favorite, the two-story museum with a revolving slate of rare classic and contemporary cars.

My appetite for speed temporarily sated, I head to the new Solis Two Porsche Drive Hotel next door. Opened in November, the 214-room Solis (pronounced “so lease”) marks the global brand’s debut in the United States. With its minimalistic furnishings and wall murals of vintage Porsches, the four-star property oozes Euro cool. Like Porsche’s North American Headquarters next door, the strikingly modern lodge was designed by HOK Atlanta (the firm behind Mercedes-Benz Stadium). Its most impressive feature is the triple-pane windows, which reduce the roar of jets at the neighboring airport to the soft rumble of distant summer thunder.

I mosey up to the property’s eighth-floor gem of an outdoor hangout, the Overdrive Lounge, where guests gather to watch sunsets over the airport runways and Porsche test tracks. I order a Manhattan and find a spot by a tabletop fire. Sipping my drink, I watch the passenger planes line up in the sky like eager fireflies and gently, rhythmically waft down. It’s a beautiful night, and the squeals of Porsche burnouts below are somehow delightful.

I am happy, but not. Truth is, I want to be down there with them. I guess the most challenging part of the “world’s most exhilarating test drive” is waving once more to that beautiful white tiger and saying goodbye.

Vroom Vroom
Get your motor running at these exhilarating driving courses