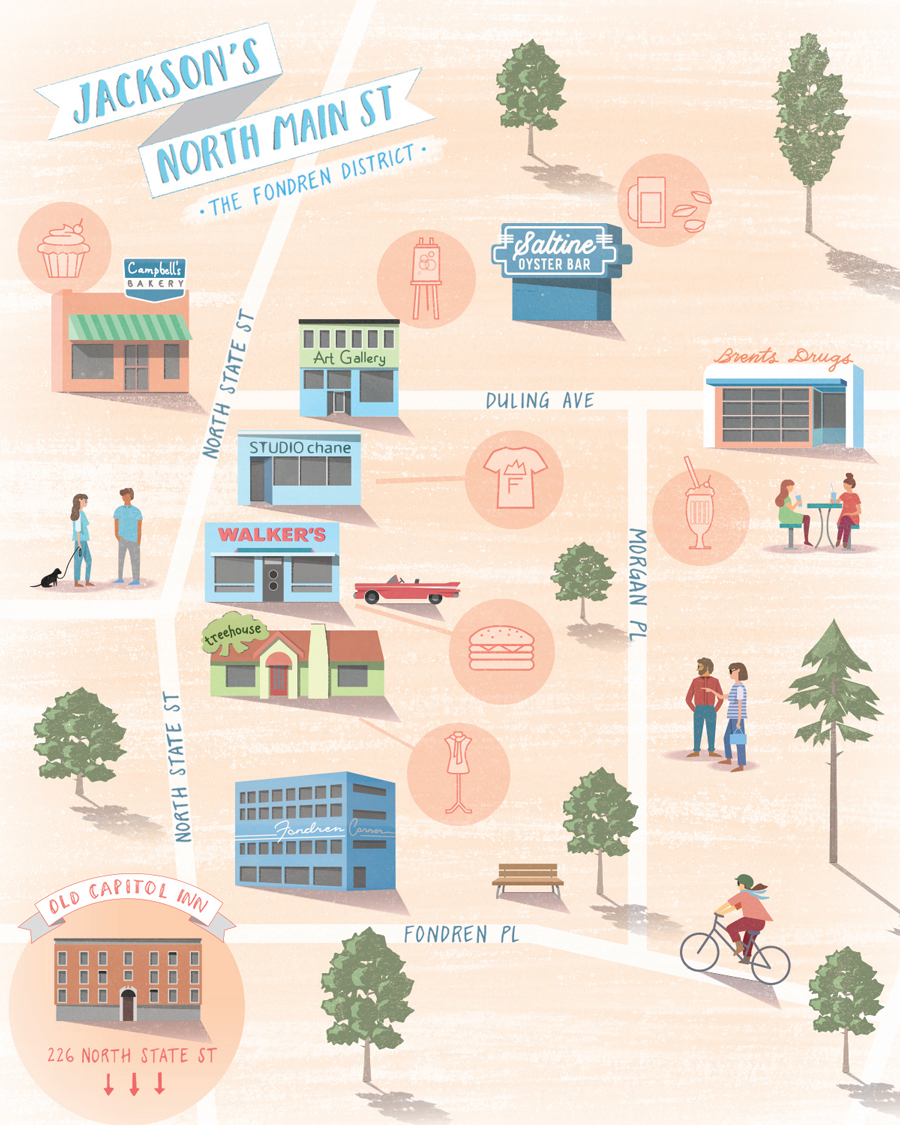 It’s Thursday evening, and the Downtown Fondren Historic District in Jackson is electric. North State Street, the area’s main thoroughfare, glows with boutiques, galleries, and some thirty neighborhood restaurants—the heaviest concentration of eateries in town. Nearly 5,000 locals have converged for “Fondren’s First Thursday,” a monthly event with pop-up farmers markets, beer tastings, outdoor yoga classes, and live music in the shadow of Fondren Corner, a five-story mid-century building that was Jackson’s first “skyscraper.” When the event winds down and the crowds head home, this nerve center of Jackson’s progressive culture looks much as it did a half-century ago, its colorful Moderne-style shopping plazas ripped from a 1960s postcard. Indeed, it’s this charming retro quality that compelled movie scouts to choose the area as the setting for many scenes from 2011’s The Help.

Although raised in Los Angeles, chef Derek Emerson spent summers with his grandparents in Meridian, Mississippi. He channels those regional roots at his casual eatery spotlighting local Gulf seafood. walkersdrivein.com

From his whimsical watercolor birds to his massive sculpture of President Obama’s head, it’s clear Jackson artist Richard McKey doesn’t adhere to any one style. His gallery showcases his own striking works and spotlights the talents of other local artists. fondrenartgallery.com

Walking into Treehouse Boutique feels like visiting owner Jude Muse’s home. Since 2004, she has transformed every nook of the pale green cottage into a staging area for designer duds and locally made accessories, with bathrooms doubling as dressing rooms and clothing by the likes of Trina Turk hanging in the kitchen. 601-982-3433

This landmark 1946 soda fountain was on the verge of closing in 2009 when local investors intervened. Brent’s now gleams with vintage, turquoise elan, serving handspun shakes and egg and olive sandwiches at the counter—and custom cocktails at the speakeasy in the back. 601-366-3427

Old Capitol Inn’s walled garden is an oasis in the heart of downtown Jackson, two miles from Fondren. Built in 1952 as the YWCA, the building closed in the 1980s. Twenty years ago, local owners transformed it into a boutique inn with twenty-two expansive suites. After relaxing in the garden, head to the rooftop lounge for fine city views and a glass of bubbly. oldcapitolinn.com

Your top 10 questions about voting absentee in Georgia, answered