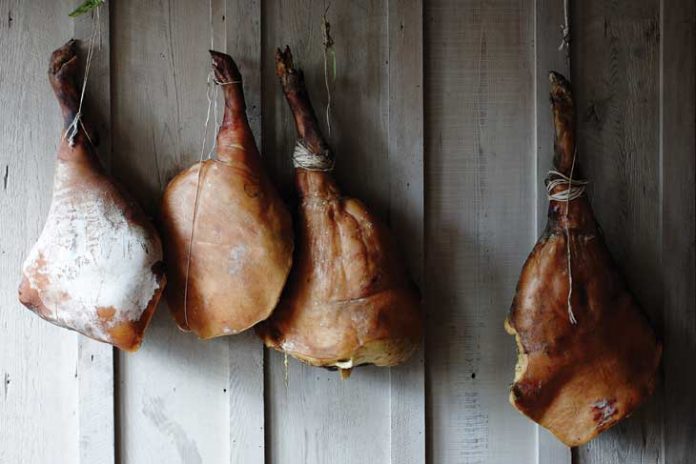 Chef Ryan Smith cures meat in the basement beneath Empire State South. Three flights below the reclaimed wood and dim lights that dominate the Midtown restaurant’s farmhouse-chic interior is a climate-controlled menagerie of sorghum sausages, fat mortadellas, and other charcuterie hanging from delicate lengths of string. Most striking are the country hams, whose aged skins have developed the rich patina of antique wood furniture. Some hams have just begun curing this month, stuffed in a cooler and encrusted with salt. A few others will continue to age for as long as two years. It isn’t often that a chef focuses so much care and attention on an item that won’t appear on the menu until 2014.

Country ham, the humble staple of the prerefrigeration South, has emerged as the next darling of pork-obsessed chefs. Last decade, artisanal bacon was such a craze that it jumped the shark right into a bottle of flavored vodka. Then pork belly (the fatty, uncured source of bacon) showed up stuffed in buns and wrapped in lettuce leaves. Six years ago, David Chang of New York’s Momofuku restaurants began devoting a section of his Ssäm Bar’s menu to tasting plates of country ham: uncooked, paper-thin ribbons arranged with the same reverence typically lavished on Spanish Jamón Ibérico or Italian prosciutto. Similarly unadulterated presentations—showcasing country ham’s balance of salt and fat, its silky texture, and its rich tang—are now in vogue across Atlanta. Holeman and Finch Public House and Empire State South serve plates of country ham cured in-house for as long as two years. Southern Art’s ham bar offers a selection of porcine beauties as carefully curated as a fine-dining wine list. Charcuterie plates are pervasive, and country ham arrives on them as a distinctly Southern signature.

But don’t expect the taste of these prized slices to show up in gimmicky mass-production vodkas. Cooks can sizzle pork fat to order, and bacon can be cured in as quick as a week’s time. The rich, raw complexities of country ham, though, require a simple but slow process that isn’t suited to the whims of fashion. For many Southerners, the words country ham conjure up the salt slabs of industrial pork that land on diner plates with a side of redeye gravy. That product, beloved though it may be, is the result of U.S. farming industrialization after World War II. Pigs were confined, treated with antibiotics, and bred to grow exponentially faster. Country ham makers folded by the hundreds while mechanized plants developed a new product that traded subtleties for a one-note, uniform ham. They taste much like a saltier, more pungent version of the ubiquitous baked spiral ham.

Cured ham is a global tradition whose two steps—salt curing followed by dry aging—date back to the Romans in 160 BC, and probably earlier. A country ham is often cured with salt and sugar for about thirty days, smoked, and then aged. A fattier ham can be aged longer without drying out, amplifying the flavors as more time passes. Country ham makers like Tennessee’s Allan Benton, who resist efforts to accelerate or cut corners on that tradition, have become the food’s celebrated saints.

What makes country ham truly country is the animal that gives its hind leg for it. Thus the search for superior country ham has become the search for the superior country hog. In Spain, where Jamón Ibérico has reached that echelon of foods whose reputations alone can inspire pilgrimages, tourists flock to the western part of the country where Ibérico hogs are raised, like a Napa Valley of pork. The distinct marbling of Ibéricos, which you can sample at restaurants like the Iberian Pig in Decatur, means a single ham can fetch hundreds of dollars. During the nineteenth century, as Virginia’s cured hams were developing into what would be known as Smithfield ham, the breeds were most likely Berkshire and Hampshire hogs who foraged and fed largely on a fat- and protein-rich diet of peanuts grown on nearby farms.

Perhaps no breed of pig has become as mythologized and coveted among country ham aficionados as the Ossabaw Island hog, a genetically pure breed of Ibérico pigs that has been isolated on an island off the coast of Georgia for nearly 500 years, brought over with the earliest Spanish explorers. Bev Eggleston, who both raises pigs and cures hams for EcoFriendly Foods in Virginia, has been breeding relocated Ossabaws since 2002. The pigs have desirable fat reserves, but years of inbreeding have left them dwarfish and ornery. Eggleston has bred the Ossabaw with Red Wattle and Farmer’s Cross breeds, creating hybrids that have more commercial promise. They could be the beginning of a country ham program as sophisticated and focused as the Spanish one, but the process is slow. Including time for curing and aging, it could take three years for one of Eggleston’s hogs to travel from the field to a plate.

The long lead time makes country ham a gamble for chefs, who are all too aware of fads and the fickleness of diners. One of Empire State South’s hams can be gone in as quick as a week once it hits the menu. Smith says that they’ve yet to achieve a rotation of curing and aging that can keep up with demand. That’s still a far cry from the heights of popularity that have defined Jamón Ibérico, though. Linton Hopkins of Restaurant Eugene says, “Whether it will get to the level of Spain, I don’t know. But I think Southern chefs are starting to understand that you don’t have to spend a thousand dollars on a Spanish product to get great ham.”

Photograph by Jennifer Davick. This article originally appeared in the November 2012 issue.