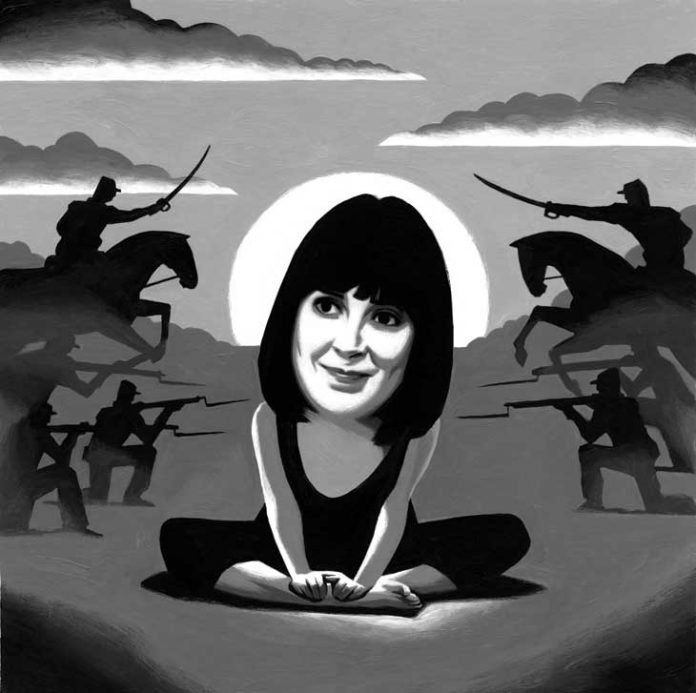 The South is supposed to be haunted—crumbling houses and graveyards crowded with specters, spirits dripping like Spanish moss from ancient gnarled trees. “Garrulous outraged baffled ghosts,” William Faulkner called them, though I’ve never seen one myself. Some days I don’t believe there even is such a thing, but I’m a lousy skeptic, always wincing at shadowy corners and unexplained house creaks. What would it be like, I wonder, to see a ghost? Other times I don’t wonder at all. Just by being among the living down here, I feel as if I already know.

When I was six, maybe seven, I asked my mother if the Civil War was still going on. Her reply was laughter—which is never what a kid wants to hear in response to a serious question concerning a potential life-or-death situation she suspects adults have refrained from informing her about. It would be years before I understood her reaction, recognizing the South as a place where a little girl asking her mother this particular question could be met with so many answers. Mirth was just one option. She laughed because she knew her answer was “no,” but someone else might have said, “Well, it depends on who you ask.” Or maybe even “yes.”

I had my reasons for wondering. It was the early 1990s; there was war on TV and war in the paintings hanging in the halls of my conspicuously patriotic elementary school. And sometimes our family would picnic at a place we called the Battlefield, and I wanted to make sure we weren’t going to get gunned down while digging into our potato salad. I had heard about this Civil War—and maybe that’s the point, that I was a kid, a child, and I knew just enough about a war to be afraid of it, or at least morbidly curious about it, 125 years after it had ended.

It’s not just the war. I have always felt a heavy something hanging over my life in the South, which has indeed been my whole life. My people have been here awhile—my grandmother’s family rooted in Tennessee since before it was Tennessee; my grandfather’s father’s father, uncountable generations back, a Welsh prince named Madoc who may have left a trail through North Georgia three centuries before Columbus learned to read a map.

I am among the first of my Southern family to be born since the civil rights movement; the ways of being, the rights, and the permissions I take for granted have not always been granted—are still, in so many ways, not even granted now. Sometimes it feels like every terrible thing that has ever happened in the South has the handprints upon it of someone who directly or indirectly gave me life. Backs were broken and stepped upon to hoist me up here today.

The Battlefield—Chickamauga-Chattanooga National Military Park, sprawling green and wide twenty-five miles from where I grew up—was the site of one of the bloodiest battles of the Civil War, second only to Gettysburg; there I flew kites and crawled on cannons welded in media memoriam like immobile bronze seesaws. I played tag on land once purged of all Cherokee, learned Algebra down the block from an accidentally exhumed burial ground. At a Charleston marketplace where human beings were once bought and sold, I paid for T-shirts and tchotchkes.

What I feel is not guilt, at least not primarily. The heavy truths of this place were not ground into me; I think they were always there. I know war and systemic hate happened elsewhere too—indeed, still happen—but in the South, they linger like the curdled stench of a burned-out fire. (“The past is never dead. It’s not even past”—Faulkner said that too.) Living here is not so much like seeing a ghost but rather perpetually apprehending an endless cavalcade of them, always slinking, silvery, just beyond the next dark doorway. By now I feel no alarm, just a certain haunted sense of knowing. I’m not sure what they want from me, but they are here, have always and will always be—me following them and them following me.

Rachael Maddux grew up in Chattanooga and now lives in Decatur. Her writing has appeared in the Believer, the Oxford American, the Paris Review’s daily blog, and elsewhere.