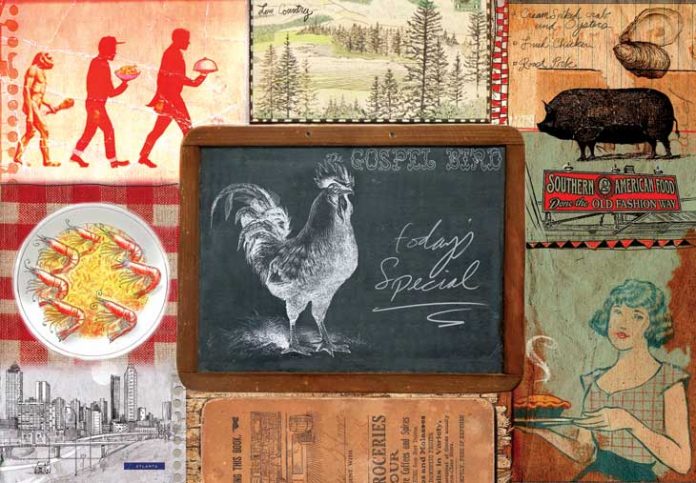 I grew up not far from Maryland’s Eastern Shore, where the South begins, feasting on crabs and oysters from the Chesapeake Bay estuaries. My father is a politician, and each summer my family traveled to a different state for the annual Southern Legislative Conference. I inhaled New Orleans beignets in a swirl of powdered sugar. I learned that North Carolinians eat tangy pork barbecue and that Texans prefer beef brisket. In 1995 I moved to Atlanta, excited to taste the city’s singular brand of Southern cooking.

Strangely, no such thing seemed to exist. Vague abstractions popped up here and there: sizzling catfish at fusion-minded Azalea, grits alongside a smoked salmon scramble at the Flying Biscuit Cafe. I found dinosaurs like Mary Mac’s and the Colonnade fascinating for people-watching but mediocre for dining. The antebellum Epcot atmosphere at Pittypat’s Porch gave me the willies. Greenwood’s on Green Street in Roswell—where owner Bill Greenwood ambled through the funky dining rooms, looking like Jolly Old Saint Nicholas in khaki shorts—was the one restaurant that satisfied my yearnings. I would mow through pork chops with sage butter, cheesy broccoli casserole, rice sopped with gravy, and crazy-huge slices of peach pie.

By 1999 Atlanta was a post-Olympics restaurant boomtown mimicking trends already fading from both coasts. Chilean sea bass over mix-and-match mashed potato flavorings (wasabi for fusion menus, roasted garlic for Italian) languished on the city’s menus. And in the mid-2000s, when I wrote reviews for Creative Loafing, clubby behemoths like Twist, Shout, One Midtown Kitchen, and Two Urban Licks ruled the scene. I could find thrilling Chinese and Korean novelties on Buford Highway and in the suburbs, and I celebrated birthdays at New American bastions like Westside’s Bacchanalia and Buckhead’s Aria.

But the options for Southern food in Atlanta restaurants depressed me. Regional cooking never seemed to click with our city’s modern, global vision of itself. “Atlanta always treated Southern cooking like it was poor people’s food,” says Nathalie Dupree. Dupree lives in Charleston now, where she writes cookbooks. But she made Atlanta her home for thirty years, launching the cooking school at Rich’s department store Downtown in 1975; filming television series, including New Southern Cooking; and even penning columns for this magazine. “Any upscale attempt at regional fare never lasted in Atlanta,” she says.

The melange of Southern food originally emerged from home kitchens, of course—at the stoves of plantation mansions built by European settlers, and from the slave cooks forced to prepare the food (incorporating their own know-how in the process). Antebellum excesses crumbled into poverty after the Civil War. Animal protein grew scarce; Southerners relied on their gardens for sustenance. Food became a fixation in the isolated agrarian South. But just as coq au vin or crepes could be adopted from French peasant traditions into haute cuisine, as the Southern restaurant culture blossomed over the last century, regional cooks realized that cream-spiked oysters, fried chicken, greens, and fruit cobblers could be served in humble cafes or transformed for elegant fine dining.

Higher-end Southern restaurants took hold in towns like Charleston and Savannah that cherished their past grandeur. Atlanta, rarely looking back or beyond its perimeters, barely seemed interested in a more refined take on Southern cooking. Then came Watershed. Opened in 1998 as a sandwich-and-wine shop in Decatur, Watershed soon named Scott Peacock its executive chef. Peacock’s mentor, Edna Lewis—the African American chef beloved for her eloquent cookbook-memoir, The Taste of Country Cooking—pushed him to honor his Alabama heritage. When they first met, Peacock told Lewis he wanted to study cooking in Italy. She replied, “Italy’s great, but some good cooks need to stay in the South.” Watershed’s Tuesday night fried chicken took on celebrity status, but I was just as content ordering shrimp-paste grits, the thick pork chop with custardy mac and cheese and tangy-smoky greens, and, in the spring, warm rhubarb crisp. It was my refuge, the epitome of the Southern dining experience I’d sought nearly a decade before.

I left Atlanta for three years in 2006, and when I moved back, the bedrock had finally begun to shift. The clubby behemoths hadn’t disappeared, but smaller, more personal restaurants were filling in the terrain, helmed by astute thinkers with their palates honed to the region. I’m thinking of Billy Allin at Cakes & Ale in Decatur. I tasted summer’s encore and autumn’s entrance in his okra fried in lacy batter and roasted pork with shell beans, frilly Lacinato kale, and butternut squash gratin. Linton Hopkins launched Restaurant Eugene in 2004 with menus that leaned New American, but it wasn’t long before lobster salads began giving way to shad roe paired with lime pickle and onion puree. Holeman and Finch Public House, the new gastropub across the carport from Eugene in which Hopkins was co-owner, glorified the Southern lust for meat with plates like sweetbreads among vinegary greens and cured hog jowl.

But in an ugly irony, for the last several years Atlanta’s Southern food fad has gone almost too far in the other direction: It’s the generic trend of the moment, like Southwestern or tapas or pan-Asian before it. You can’t avoid pimento cheese and deviled eggs. I could drown in a quicksand of shrimp and grits. Why? Did a wave of regional pride suddenly sweep through the hearts and minds of our restaurateurs? Hardly. It’s because Southern food became the nation’s hot cuisine, and Atlanta is still tagging along behind the bigger boys. Arbiters on either coast who preach the gospels of local food cultures began realizing almost a decade ago that the South breeds the country’s finest cuisine. It helped that Southern cooking’s essence comes custom-fit for the ethos of the locavore movement. Also, who doesn’t love fried chicken? So now the gospel bird perches on menus in San Francisco and Los Angeles. And restaurants in New York with names like Seersucker and Red Rooster Harlem book to capacity. The Southern Foodways Alliance symposium, an annual gathering in Oxford, Mississippi, that exalts the region’s chefs and cooking, sold all 300 of its $595 tickets in twelve minutes this year, a record in its thirteen-year history.

John T. Edge, director of the SFA, surveys our scene with a sunnier view. “I think Atlanta’s present-day contributions are underrated,” he says. “When it comes to identities and attitudes toward Southern food, New Orleans may be romantic, and Charleston may be revivalist, but Atlanta is honest about its progressive attitudes. It doesn’t cling to any sense of the past, and it doesn’t apologize for it.”

Some of our finest chefs indeed deserve praise. Steven Satterfield, executive chef at Miller Union and a Georgia native, frequently prepares homey, straightforward dishes from the coast, like country captain, the tomatoey curried chicken dish. Ryan Smith and Hugh Acheson of Midtown’s Empire State South will pickle muscadine grapes and orchestrate them among grilled octopus, fermented pepper paste, pig ears, and lardo. Joe Truex took over as executive chef of Watershed (now Watershed on Peachtree, a nod to its new Buckhead digs) when Scott Peacock moved back to Alabama in 2010. Truex is the Miles Davis to Peacock’s Louis Armstrong: He deconstructs jambalaya into separately cooked elements of seafood, sausage, and rice, and he may offer Hawaiian tuna poke as a special alongside menu staples like chicken-fried steak.

But we don’t have enough places like these, and more chefs in that caliber could look for inspiration even closer to home. And I’m downright skeptical of the neighborhood restaurants that latched onto the Dixie bandwagon only because it’s part of the zeitgeist. “Southern farm-to-table” (please, let’s annihilate that catchphrase) is redundant. If you’re cooking regional food, obviously you should be using regional products. But there’s the catch: We revert to cliches. And when pimento cheese, fried green tomatoes, and shrimp and grits become so ubiquitous that they fall into the same tired category as molten lava cake, these chefs and owners will probably move on to the next trend—Peruvian, Scandinavian, reinterpreted state fair food-on-a-stick, whatever.

Atlanta wants desperately to be noticed, but our restaurants won’t win real prestige until we start leading, by claiming what’s all around us and what we’ve ignored for so long. Look now, before New York does, to Georgia’s coastal and mountain cultures for dishes like Savannah-style red rice, creamed chicken with Madeira over rice, the spicy fish dish known as pine bark stew, fried rabbit, and dried apple stack cake. Make our restaurant landscape unique by digging deeper into where we are. Peacock embraced his origins, and though he moved back to Alabama, he still richly influenced Atlanta dining and the whole country’s perception of what Southern food is. We need to strengthen these connections to the land and the history not because it’s trendy, but because, whether you’re a transplant or not, it’s the gift of where we live.

Illustration by Anthony Freda. This article originally appeared in the November 2012 issue.