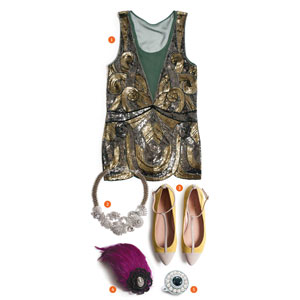 There was a dichotomy in 1920s fashion. Designers like Coco Chanel introduced a looser, more practical silhouette that freed women from corsets. Yet they also embraced the extravagance of the Jazz Age. This complexity has made the decade’s style perennially appealing, and this spring it surfaces again—aided by the luxurious costumes on Downton Abbey and in Baz Luhrmann’s remake of The Great Gatsby. After the Great War, “people wanted to eat, drink, and be merry, for tomorrow they may die,” says Sarah Phillips Collins, associate chair of fashion at SCAD-Atlanta. “A bit of that mood lingers now with the recent economic slump.” Watch for these looks:

Drop waist
The decade’s definitive silhouette appears in everything from casual frocks to glitzy gowns. “Women wanted the look of a flat bust and no hips,” says Collins. “There was a preference for a very boxy silhouette that had more of a swing to it.”

Filigree jewelry  and pearls
Influenced by skyscrapers, art deco, and even art nouveau, the baubles of the time featured floral motifs, lace patterns, and intricate beading. Tiffany & Co., which provided the jewelry for Luhrmann’s film, is releasing a Ziegfeld Collection of pieces inspired by the company’s archival designs from the 1920s.

T-strap shoes
These styles, such as the iconic Mary Jane, were enormously popular during the 1920s because they mixed fashion with function. The center strap and lower heel enabled women to dance into the wee hours. “They weren’t going to come off if you were doing the Charleston,” says Collins. “Plus, they weren’t a totally closed-up shoe, so exposing a bit of the foot gave them a sexier look.”

Headpieces
From feather fascinators and embellished pins to more traditional headbands, hair accessories were a way for women to flaunt their shorter hairstyles. “There was a tremendous attention to detail in these accessories,” says Atlanta-based stylist Melissa Welch. “You see a lot of detailed beading and elegance.”