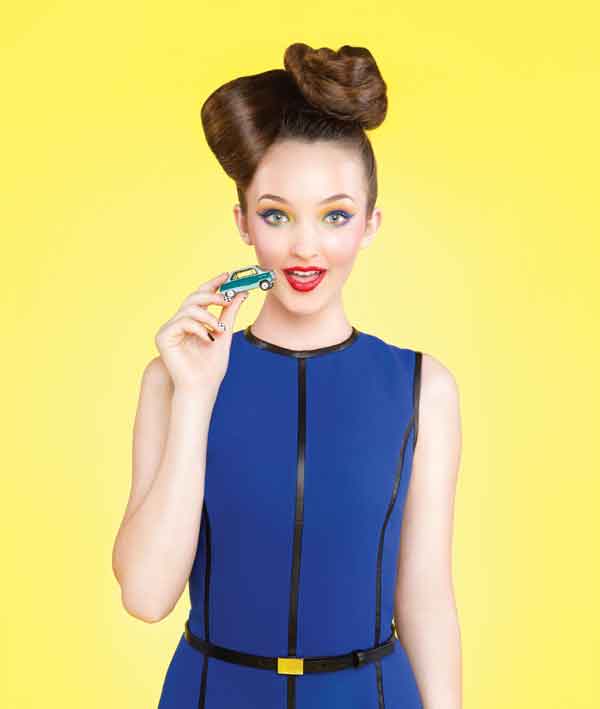 Enough with austerity. This fall, bright blocks of color cheer up any wardrobe. We take inspiration from European automakers who, after World War II, coped with material shortages by producing tiny cars that were very big on style. From the late 1940s through the early 1960s, manufacturers created mostly single-cylindered “microcars”—a bridge between a scooter and a standard automobile that drove up to 100 miles per gallon (“Cheaper than walking!” ads raved). The world’s largest collection of these mostly three-wheeled vehicles happens to be less than a gallon away (by micro standards) in Madison, Georgia.
The fleet belongs to now Atlantan Bruce Weiner, who amassed his fortune making bubble gum and vintage treats like Razzles and Nik-L-Nips, then selling his Toronto-based firm to Tootsie Roll in 2004. Weiner named his Morgan County farm Dubble Bubble Acres after his former company’s most well-known confection. A longtime antique car buff—who already owned roadsters by Austin-Healey, Triumph, and Jaguar—Weiner spotted an ad for a Messerschmitt microcar in 1991. “I saw a picture in Hemmings Motor News, and I was intrigued,” he says. “I talked to the guy all night long, and I bought it. I loved the chase. Microcars are all about the chase.”
The hunt has taken Weiner all over Europe, Australia, and even Asia. Once he discovered a trove of more than twenty that had been locked away, gathering dust, in a German barn since the early 1970s. It took Weiner eleven years to persuade another aficionado to part with his collection, which had been disassembled so no one would steal it.
Weiner has gathered more than 250 microcars, worth anywhere from $20,000 to $140,000, in his Madison warehouse and sometime museum. His favorite is still his first Messerschmitt, a brand whose cult fans have included Elvis Presley. The Peel P50, pictured on page 62, is the smallest car ever made. It is so streamlined that it does not have a reverse gear. If you need to go backward, you simply get out of the car, grab the rear handle, and turn it around.
Not unlike today’s automobile designers, the French, Spanish, and Italian microcar makers capitalized on style—check out the James Bond–worthy Rolux Baby convertible from France on page 64. British models tended to be handsome and boxy, while German manufacturers—see the BMW on page 60 and the Brutsch above—mastered engineering. The sporty German IHLE “Schottenring” Car on page 58 actually was part of an amusement park ride. Weiner’s facility is currently undergoing renovation and is closed to the public, but may reopen as a museum next year. microcarmuseum.com
This article originally appeared in our September 2011 issue.
Advertisement