Home Uncategorized Is Felicia Barth-Aasen the Next Vera Wang? 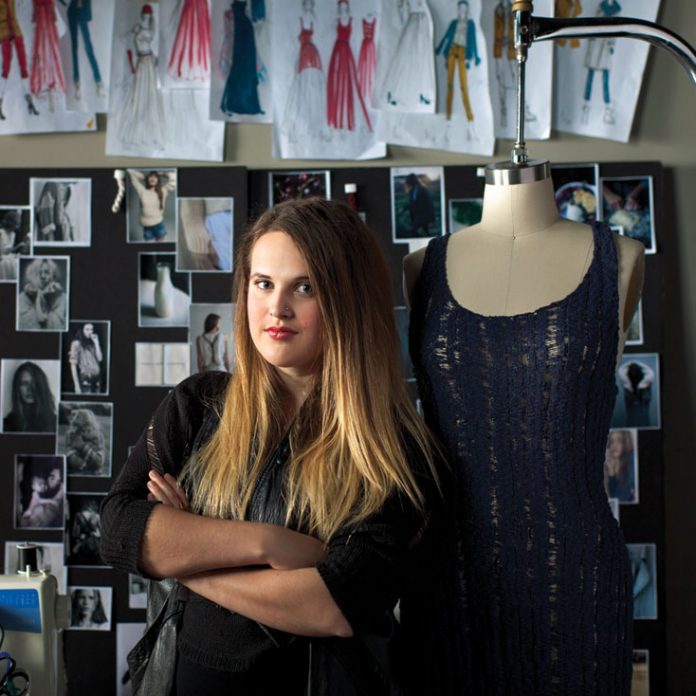 Like Vera Wang, Felicia Barth-Aasen went from being a nationally competitive ice-skater to creating her own fashion line. At age twenty-four, she looks like a veteran designer too—ensconced in a Dallas, Georgia, studio packed with clothing, a dress form, and sketches and wearing a simple all-black ensemble (another Wang similarity).

Raised in Acworth, Barth-Aasen moved to Lake Placid, New York, at sixteen to pursue figure skating, but she always had an eye for fashion. “I’ve been sketching for as long as I can remember, and I would design my skating competition outfits,” she says. “I loved that part of my life, but at eighteen I had to choose between joining Disney on Ice or going to college.” Barth-Aasen ultimately went to the Fashion Institute of Technology in New York. Focusing on women’s sportswear, she had Calvin Klein as her personal FIT mentor before graduating in 2011.

In early 2012, Barth-Aasen was accepted, out of a hundred other applicants, into L.A. Fashion Week and started creating her own line, Collective 26. “L.A. Fashion Week is all about showcasing independent designers, but you have to show that your designs are unique. [It was] a huge highlight and stepping stone into the industry,” she says.

Barth-Aasen’s style displays an upscale bohemian sensibility. Her first collection, titled “Submerged,” reflects a whimsical, clean, underwater aesthetic—fluid chiffon, worn leather, and hues of blue and gray in a thirty-piece line, which includes swimwear, knitwear, and jackets. The grouping garnered serious attention from Los Angeles media and bloggers. Now back in Dallas, Barth-Aasen has set up a basement studio and continues to design her contemporary line (retail ranges from $100 to $800) and court buyers from Atlanta, upstate New York, and Los Angeles. Under way is her fall-winter 2013 line: “I found a pair of antique welder glasses at a market. They’re inspiring me to make a more industrial line for the coming season.” collective26.com