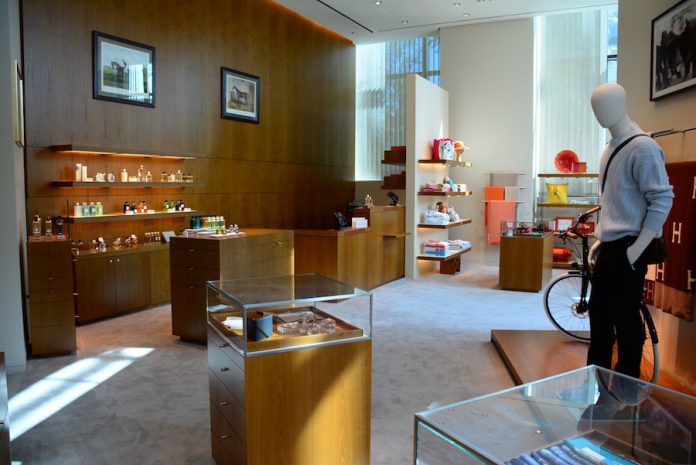 At 10 a.m. today, the first five shops at Buckhead Atlanta swung open their doors to much fanfare.

Clustered around Buckhead Avenue and Bolling Way, Hermès, Etro, Theory, Canali, and Brunello Cucinelli started selling their tony wares this morning. Among them are storefronts with signs for shops to come—some as soon as next week—including Moncler, Dior, Tod’s, Bonobos, Scoop NYC, and Warby Parker. (For the full list of retailers and their anticipated openings, see below.)

Last night, anchor tenant Hermès kicked off the development’s grand opening with a private bash. Outside the store, wooden stalls were arranged to mimic a Provencal market, and an “Hermès café” with Parisian bistro tables and chairs sat beneath twinkling strand lights. Guests dined on lobster claws and oysters and filled straw baskets with flowers, charcuterie, fresh fruits and vegetables, baguettes, and macarons. Mimes perched high on stilts entertained, as did two crooning, French-sounding bands. Inside, the store opened its doors to gleaming glass display cases and open wooden shelving with enamel jewelry, leather goods, china, shoes, men’s and women’s clothing, equestrian products, and more from the heritage brand. The CEO of Hermès USA, Robert Chavez, gave tours, and top clients, scarved and balanced on high heels, oohed and aahed. One bystander remarked she’d never seen so many Birkin bags in one place.

This morning, a crowd gathered for speeches from Mayor Kasim Reed and developer Dene Oliver of Oliver McMillan (a stylish Californian who’s prone to kissing top officials like Reed and Sam Massell), who laid the final brick together. (Final being relative, of course, as the development will continue to be in the works through 2015, with more retail, restaurants, residences, and even a hotel to come.) Afterward, an eager following flocked the new shops.

So now, the buildings are in place, and some shopfronts are open, but will people buy?

First indication: Last night at Hermès, I spotted a green crocodile wallet with diamond hardware and a matching clutch in a display case. One could hardly miss them—the green was so stunning and the diamonds so bright. Dollar signs bounced in my eyes. But by the time Oliver and Reed had finished laying the brick this morning at 11:30? Purchased, to be toted away to some Buckhead estate, perhaps.