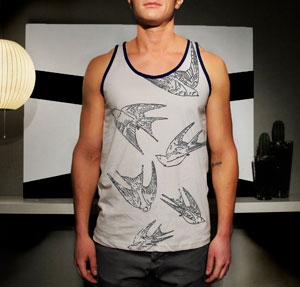 In a market saturated with graphic tees, James Anthony’s line stands out for its compelling antique images, which range from scientific drawings to vintage advertisements to architectural details. Each garment is printed by hand—by Anthony himself. In an airy Midtown studio, he creates silk screens using a homemade “exposure unit” with ultraviolet light, then applies water-based (but durable) ink with a squeegee. Anthony, who launched his eponymous line in 2007, studied art history and photography in San Francisco. He scours digital libraries for images and produces as many as 500 tees, dresses, skirts, and scarves a month. Each piece is accompanied by a description of the design’s provenance. For example, a skeletal hand is a turn-of-the-century image from X-ray inventor and German physicist Wilhelm Conrad Röntgen, who X-rayed his wife wearing two finger rings. To decide which illustrations to use, Anthony posts ideas for feedback via Facebook. James Anthony Apparel makes men’s and women’s clothing, from $36 to $80.  jamesanthonyapparel.com