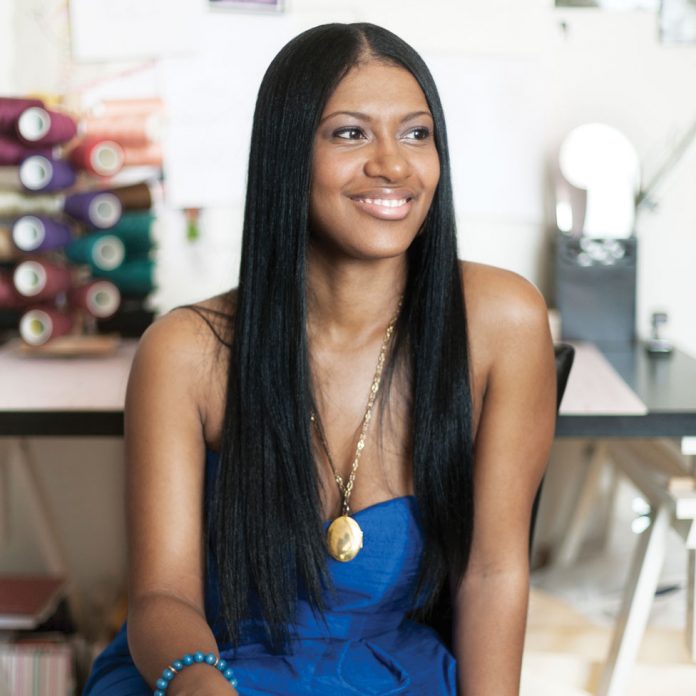 Charleston Fashion Week has a new belle for this year’s ball: Larika Page. The Lithia Springs resident entered the aughts as an accounting analyst at Ryder but exited them as one of Atlanta’s top rising designers. Page first burst onto the scene a year ago, when she won Charleston Fashion Week’s annual contest for nascent couturiers, and she will return to the Southeast’s premier fashion week on March 26 as its “featured designer” to show her upcoming fall 2011 collection—her first full collection.
Page stumbled across Charleston Fashion Week on a blog in late 2009. Once accepted among the eight competing designers for the show, Page needed to produce a ten-piece, ready-to-wear spring collection. Inspired by 1950s Miami Beach (see page 60 for more on this getaway), her looks featured boatnecks, tubular shapes, and high waists. Judges Cynthia Rowley and Mychael Knight adored her two-tier tulle raincoat and sent the mother of two on to the final round, for which she had to create an outfit inspired by Alexander McQueen—using ten oxford shirts. Page added cobalt-blue satin brocade and silk organza to make a wearable costume that seemed befitting of Lady Gaga. She won, which netted her a $15,000 professionally designed website and $1,000 to continue her line. And this past December, she won yet another accolade, scoring the Best Up-and-Coming Designer honor at the Atlanta Fashion Awards. The fall pieces that the thirty-two-year-old will show this month take inspirations from African and Indian patterns and fabrics.
La belle époque roughly means “the beautiful era” and refers to the flamboyant opulence of European society in the late nineteenth century. Page took a liking to the period when she studied it at American InterContinental University—so much so that she adopted it as her brand’s tagline. Though the term hearkens back to the 1870s, her aesthetic is grounded in 1970s flourishes, best depicted by Studio 54, Halston dresses, and the 1983 classic Scarface. “In the seventies, you dressed to the nines,” she says. “You would have thought a regular person was a movie star going to the club.” Within a year, she hopes to move out of her current eighty-square-foot workspace in her house and open her own studio-cum-showroom in Buckhead. Until then, fans can purchase pieces on her website. larikapage.com
This article originally appeared in our March 2011 issue.
Advertisement