Keeping up
To match the new interior, Phipps Plaza’s facade is getting an overhaul this fall, with perforated metal panels and a glass curtain wall. (We can’t picture it, either.)

Shuttered
Say goodbye to the outdoor shop Gear Revival, Sperry Topsider at Perimeter (still at Lenox), and C. Wonder everywhere. Also? Everything But Water has taken over Buckhead’s Atlanta Beach.

Avalon news
The Alpharetta development reports Crate & Barrel, Marmi, and Bonobos, among others, will open by summer. experienceavalon.com

Trending
Spring is all about wide-leg pants, fringe, and platforms. See our style guide for products, looks, and tips—for the gents too.

This article originally appeared in our March 2015 issue as a part of Scout About Town. 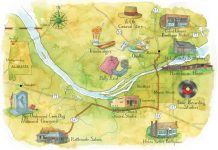