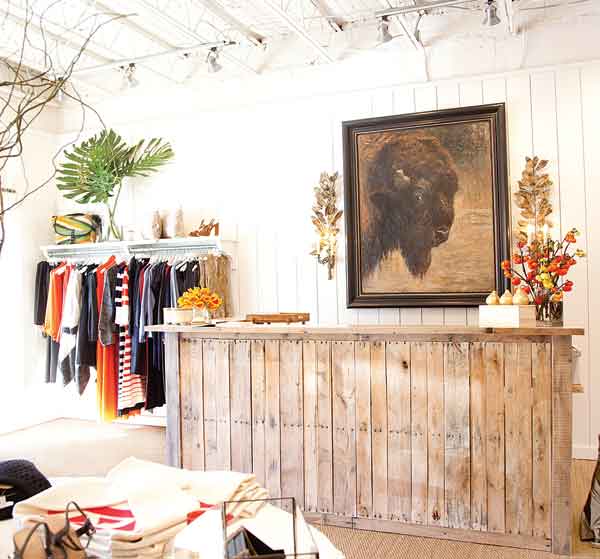 Morgan Kylee Henzlik makes no apologies for wanting to shake up Atlanta’s shopping culture. The twenty-six-year-old entrepreneur opened her eponymous boutique in mid-August with a promise to provide something different from the conventional women’s styles that are saturating Buckhead stores. “For such a cool city, the fact that Atlanta doesn’t have more high-end boutiques that express an individual style is unfortunate,” says Henzlik.

The bohemian chic and tomboy edge of this Buckhead native’s style is evident the moment you walk into Henzlik’s Roswell Road shop. As the clean fragrance of a Sydney Hale soy candle fills the air, your eyes go straight to the massive painting of a buffalo hanging above the checkout. The inventory reflects the eclecticism of its owner: classic Smythe jackets, MiH jeans, a fashion-forward orange maxi dress by Raoul, bold printed merino wool scarves from Virginia Johnson. According to Henzlik, about 95 percent of her brands, like Lauren Moffatt and Rick Owens, are not carried anywhere else in Atlanta. “I think it’s easy for people and stores to get trendy and for Atlanta to be conservative, so a lot of stores buy and sell the exact same product. I’m bringing an eye for different styles.”

Morgan Kylee came to fruition only ten months after Henzlik decided to open a store. When she graduated from the University of Kansas in 2007 with an architectural studies degree, Henzlik was thrust, like so many recent “boomerang kids,” into a poor economy with few job opportunities. Several years after college, she was still looking for the right position when her parents asked her what she would do if she could do anything. Henzlik’s reply was immediate: open a boutique. Her father, who works in commercial real estate, was able to find the space, while her mother, an interior designer, assisted with decor. But it was Henzlik who took on what the shop would carry. “Originally I wanted to open an affordable place where my friends could shop—until my mother said, ‘Wrong! Your friends have zero money!,’ which had me quickly change my point of view to cater to women who had the means to spend on timeless, quality pieces.” Henzlik attends all the major markets, including Coterie and Fashion Week in New York, to buy clothing and accessories, with prices ranging from a pair of jeans for $78 to a neoprene jacket for $1,200. She is continually adding new items and unknown (for now) designers to her inventory. “The store is 100 percent reflective of my personal style. In New York City, you can go into stores and it doesn’t matter if you buy anything; it’s just a cool experience. That’s the vision for my store I want to bring to Atlanta.” 3273 Roswell Road NE, 404-307-4668, morgankylee.com

This article originally appeared in our December 2011 issue.