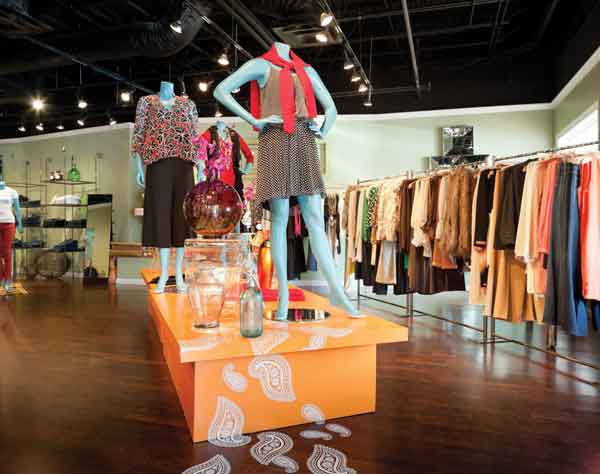 In the fickle world of women’s fashion boutiques, reaching the quarter-century mark is as implausible as finding a Birkin bag at a yard sale. So how is it possible that Sandpiper has been around for twenty-five years? We talked with Melissa Murdock, a Chicago native who opened her successful shop in Vinings Jubilee in 1986, about how she has kept her business booming and her style savvy.

“Black Monday happened [not long after] I was starting the Atlanta store, then a few years later Marc Jacobs grunge style was [everywhere],” Murdock recalls of the less-than-glam trend. “It was a bad economic and fashion time for all of us.” That late-eighties stock market crash and the subsequent recessions have kept Murdock trying everything to stay ahead—whether it’s joining fashion merchandising groups or seeking advice from consultants and accountants on how best to keep her business afloat. “As time has gone on, I’ve learned to surround myself with people who are smarter than me,” she says. “You can’t expect to be an expert at everything, so it’s important to keep those around you who can give you the right advice at the right time.”

Sandpiper’s racks have always read like a Fashion Week show schedule, with names such as Tibi, Milly, and Diane von Furstenberg. Items are kept largely within a contemporary price range of $150 to $500. Murdock attends the major fashion market shows in New York, including Coterie and Intermezzo, several times a year to hand-select every item the store carries. And while she was raised in the seventies and loves to adorn herself and her customers with bell-bottoms and long dresses, Murdock’s favorite fashion era is the eighties: “The eighties were the best because everyone dressed up; women wore a ton of makeup and had lots of big hair!” Murdock admits that to this day she still sports the occasional big shoulder pad, reminiscent of that beloved decade. Her adoration of fashion—from her personal eclectic style to her one-on-one interaction with shoppers—keeps Murdock’s clientele continually shopping at her store. “The best part about my job has been the customers and the people who have been working beside me. The day I don’t want to dress somebody up is the day I know I need to walk away.” 4300 Paces Ferry Road, 770-433-2989, shopsandpiper.com