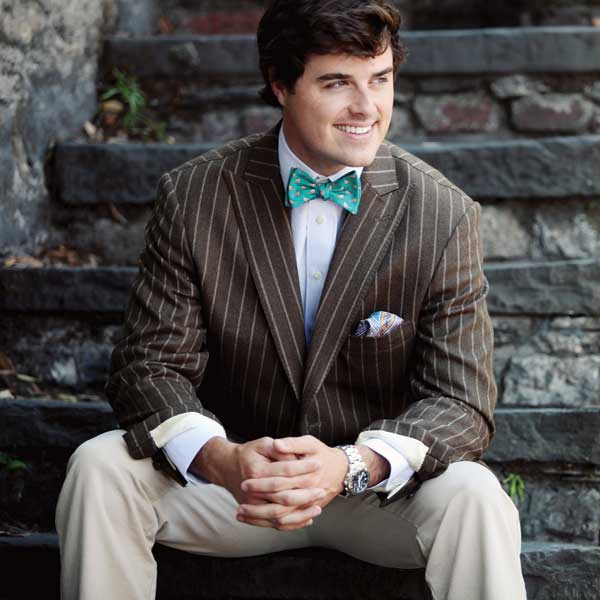 One Saturday afternoon six years ago, Emmie Howard and Reagan Howell were eating cheeseburgers at the Vortex Bar & Grill when talk turned to how good their dates had looked at a party the night before. Friends since college, the two women “like to surround ourselves with guys that look their best,” says Howard. Her idea was to promote that sense of style in their own line of men’s clothing. Within a few hours (and an extra order of Tater Tots), the two women had laid the groundwork for what would become Southern Proper.

Launched from a home office in Brookhaven in March 2006, Southern Proper is the reflection not just of the two women’s personal tastes but of exhaustive market research. For instance, Howard and Howell discovered that a black Lab was the one image that men most identified as Southern. The image of the dog, known as Beau, became the logo for Southern Proper and is on everything from the brand’s frat hats to “sweet tees.” In addition to Beau, Southern Proper’s pocket squares, neckties, bow ties, and belts portray iconic Southern imagery—cotton, moonshine bottles, Mississippi magnolias, and SEC colors. Prices range from $5 for a coozie to $68 for a silk necktie. Howard’s classic, refined style complements Howell’s diverse, funky flair, represented in the traditional yet edgy look of their brand.

H. Stockton and London Trading Co. offer Southern Proper merchandise. The line has been especially popular among fraternity boys, sports enthusiasts, and bridal parties, with ties that can be customized to represent any school, club, or team. This spring Howard and Howell are introducing the Gentleman’s jacket, a hopsack navy blazer complete with double-barrel cigar holder and flask pocket. Their plans for 2013? To dress a Southern gentleman from head to toe. southernproper.com

This article originally appeared in our January 2012 issue.