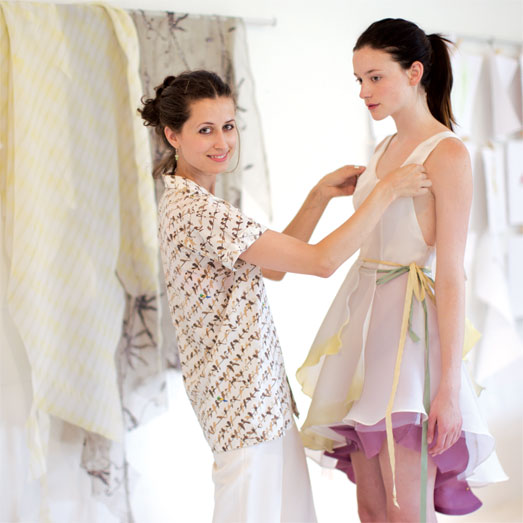 Working out of a 1,500-square-foot former cotton gin factory turned into a Westside studio, Tian Justman has cultivated a name for herself in the upscale world of socialites and CEOs as a designer of custom dresses. Come October, she will have her own ready-to-wear line. The Conyers native grew up surrounded by fashion. Her mother was a buyer for the Macy’s in Downtown, and her father had an accessories line; she was pulling clothes for shows by age twelve. The last four years have seen her making gowns for fundraisers and social events while also working full time at Saks Fifth Avenue at Phipps. And during this past summer, the twenty-seven-year-old spent her days hunched over a makeshift plywood table, rooster crowing in the background, as she finalized the drawings for her upcoming exhibition.
Describing her spring collection as airy, whimsical, and architectural, Justman allows muted earth tones to dominate her thirty, mostly silk pieces. Her biggest risk? Formal overalls. Self-contradictory as that may sound, the overalls will function as a modified, dressy pantsuit. “I think I’m kind of an oxymoron,” Justman jokes. “I throw the girliness in with the androgynous structure.” Made out of thick silk organza, the outfit still sports a square neckline. But thanks to a wider leg opening, gemstones for buttons at the straps, and a cinched waist, the piece comes off as elegant and maintains some semblance of a structured silhouette. Justman has experimented with extreme designs before: She built an entire gown to look like a tree for a Captain Planet Foundation event, using a walnut-stained silk for the body and a green organza shrug at the shoulders.
The formal overalls represent two currents flowing throughout Justman’s collection: her country background and her Parisian aspirations. Breaking from the debutante outfit associated with Southern style yet embracing the region’s famous love of color, Justman’s collection is one part provincial Buckhead, one part the glamorous dream of Streets of Buckhead. “I’m trying to bridge the summer airiness or Southern heat and humidity with the streets of Paris and create a collection that feels just as at home here as it would anywhere else in the world,” Justman says. As for the future, the local designer hopes to open a flagship boutique within three years, maybe even in Atlanta. tianjustman.com
This article originally appeared in our September 2010 issue.
Advertisement 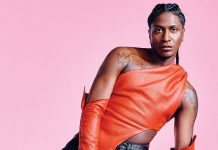