Davis rose to local celebrity status as an on-air DJ at 92.9 FM (then the rock station known as Z-93 and later Dave-FM) in the 1990s and aughts. Now Atlantans can turn the dial to 90.1 WABE every Friday for her live music weekend preview, “Mara’s Music Mix,” or find her cohosting Atlanta Eats on Peachtree TV and News Radio 106.7. Lesser-known fact: The media maven is also a beauty guru who serves as a brand ambassador for Woo Skincare and Cosmetics.

Hails from South Florida. I was in Boston and Rochester before landing in Atlanta in 1994.
Neighborhood Virginia-Highland. I’ve lived there for 13 years. You can walk everywhere, and there’s no better bread in town than Alon’s.
Beauty indulgences I absolutely love getting a blowout. I go to Terry at Salons by JC at Ansley Mall, then I get a mani/pedi from Amy at Creme de la Creme.
New makeup discovery The Trish McEvoy planner with eye shadow, bronzer, brushes. When I travel, everything is in one case.
Listening to Gaby Moreno, a blues singer who played recently at Smith’s Olde Bar. I haven’t been so moved since I saw Adele back in 2009.
Favorite venue Variety Playhouse. I love the location, the history, the grittiness. They do such a great job of booking; they’re like two years ahead.
First concert Rick Springfield. I think it was around 1982 at the Dade County Youth Fair. I was 11. He wore one pink Chuck Taylor high top and one purple.
Best interview Bradley Cooper. It was right before The Hangover came out. He was just the nicest guy. We spent most of the interview talking about Neil Young because he was such a big fan.
Recent splurge Prada boots from Jeffrey. They were an investment purchase, and I wear them every day. You can wear everything else from Target if you have a good shoe.
Oldest thing in your closet  A black leather vest that was my dad’s in the 1980s.
Dream show A radio talk show where I could be like Howard Stern for women. Or a TV game show about food. When I’m on TV, I get hair and makeup.

Jewelry find
“Jen Boaz jewelry is my go-to. It’s inexpensive, edgy, and fun. When I wear her stuff, people stop me to ask about it.” 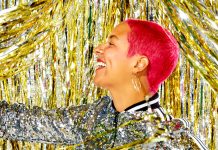 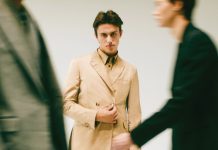 The suit is back, from bold and nontraditional to cool and classic 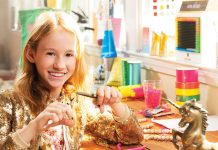