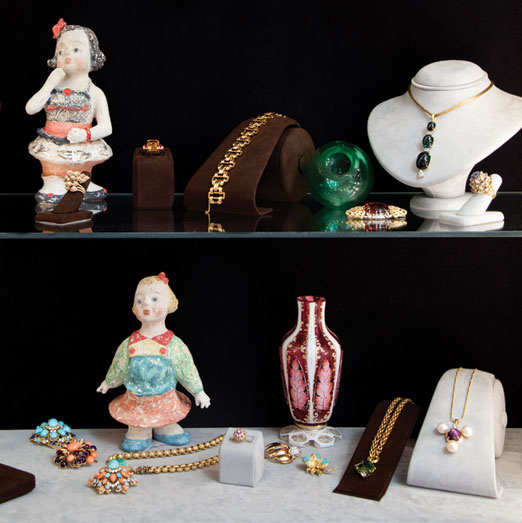 Today’s jewelry errs on the side of safe and streamlined, says Timothy Tew. The esteemed art gallery owner, and now jewelry curator, prefers the flamboyant ornamentation and attention to craft that prevailed in the fifties, sixties, and seventies, when gold—an essential ingredient in jewelry-making and its market’s economic yardstick—cost significantly less. (The metal sold for $35 an ounce then; it sells for more than $1,000 now.) Thanks to the lower price of production, designers could indulge and experiment. Cartier, Dior, Bulgari, and others created dramatic pieces in this period that weren’t just fashionable; they were art. “It really comes down to something very akin to painting and sculpture, and it is color, and it is form, and it’s bold,” Tew explains.

His mother’s jewelry box, filled with costume jewelry, piqued his interest as a child. He developed an appreciation for fine art in college, opening his namesake Buckhead gallery in 1987. But his love of bijous lingered. He took courses in metalsmithing and began studying gemology in 2008. Then he started acquiring jewelry.

Last September, Tew premiered his assemblage (estate and antique jewelry, as well as original pieces), putting it up for sale alongside his gallery’s paintings and sculptures. His prized pieces include a turquoise, coral, and diamond brooch; a painterly emerald and ruby ring; and many items from India. Tew Galleries also showcases contemporary designers. Rebecca Myers, whose jewelry looks like embellished nature, will have a show opening September 9.

All the glamour, femininity, and brazenness inherent in Tew’s sense of style give it a distinctly Southern quality. “There are certain Southern women that get the bigness of it,” Tew notes. “Their mothers had it, their grandmothers had it, and they’re not shy about it.” 425 Peachtree Hills Avenue, Unit 24, 404-869-0511, tewgalleries.com

This article originally appeared in our August 2010 issue.