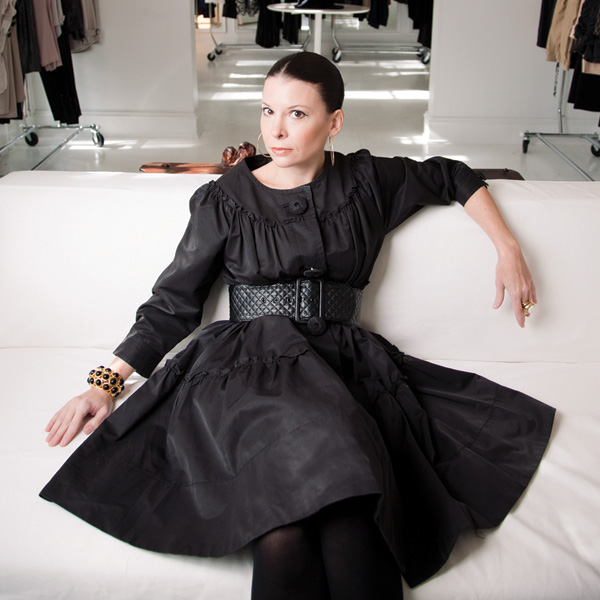 With her hair still pulled back into her signature tight bun, April Wilkins has returned. A ten-year veteran of Saks, the PR doyenne left Atlanta for South Florida three years ago, but a retail shake-up on East Paces brought her back to Buckhead. A chance to nab the cottage that formerly housed Lexie and Jane was too good for Wilkins to pass up, so she used it as an opportunity to finally open her own shop. Although her new boutique doesn’t have the breadth of a department store such as her former employer, Wilkins knows that promotion is half the battle. “I can come in and I can take really great pieces that I believe in and market it just as strongly,” she argues.
As its name denotes, Vetted is about selection. Wilkins forgoes label love when it comes to choosing her merchandise. Although she has experience working with Michael Kors and Yigal Azrouël and an affinity for Yves Saint Laurent, shoppers won’t find those brands in her store. Wilkins instead opts for standout pieces from smaller designers that offer upscale value at lower prices, such as Geren Ford and Myne. Thread Social dresses have the sort of tailored details one expects from Oscar de la Renta, but they retail for upwards of $300 instead of more than $2,000. Wilkins takes pride in her editing skills, and each season promises a new set of lines. For spring, Wilkins has her eye on some lightweight soy cotton separates from H Fredriksson, while the shop’s current array includes cashmere ponchos and leggings by CZ Falconer, a hot pink wrap skirt from Tt, and a Romygold biker tote.
Vetted usually carries only three or four selections of each piece, and once they sell out, they’re gone. It’s an approach the ill-fated Merino employed until it closed its Shops Around Lenox location at the end of 2010, and shoppers can take heart that this new destination caters to women who like to stand out in a crowd. “When you’re selling them a beautiful cocktail gown, they want to know that when they go to the party, not everyone’s going to have it on,” Wilkins explains. 516 East Paces Ferry Road, 404-228-4279, vettedatlanta.com
This article originally appeared in our January 2011 issue.
Advertisement