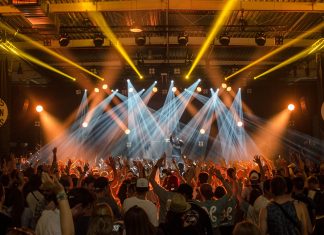 Who wants craft beer in bottles? Bottles let in light, which is bad for beer. Cans are easier to chill, and they pack well for hikes, pools, and floats.

The Old Reliable SweetWater 420 in cans? For fans of Atlanta’s intown behemoth brewer, it’s about time. Also in cans: Its IPA.

The Adventurers Terrapin calls its new Hi-5 IPA “a whitecap on an ocean wave.” We just call it refreshing. Also in cans: RecreationAle.

The Purists This lager, like all of Marietta’s Red Hare brews, has been in a can from the get-go. Also in cans: Its brown ale, its IPA.

Kimberly Turner - June 16, 2014
The perfect playlist can complete a summer. Here is a summer playlist made up of Georgia artists ranging from The Zach Brown Band to B.o.B.
Read more

Outdoor dinner tips from the author of Picture Perfect Parties

Mary Logan Bikoff - June 16, 2014
Southerners love to entertain outdoors. Chef-owner Billy Allin of Cakes & Ale and his wife, Kristin, have the perfect garden for a soiree, set on two acres in Decatur. For an intimate party, Allin crafted a menu of fresh-picked ingredients. Annett Joseph, stylist and author of Picture Perfect Parties, created a sophisticated but relaxed table, where family and friends clinked glasses and dined in the fading sun.
Read more

Mary Logan Bikoff - June 16, 2014
The summer means heat, mosquitoes, and sunburn. What can you do to thwart the season's attempt to bring you down?
Read more
123Page 1 of 3