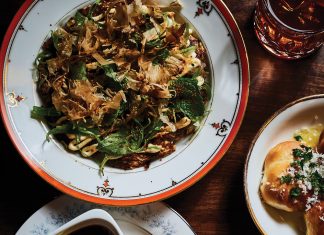 Christiane Lauterbach - February 5, 2018
If you were to cram the ’50s, ’60s, and ’70s into a blender, you’d end up with something close to this self-styled “diners club.” Golden Eagle shouldn’t be taken too seriously as a restaurant, but it’s also more than a nostalgia-themed hot spot appealing to millennials’ love of vintage.
Read more 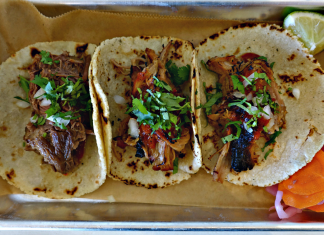 Eat This: Tacos at Muchacho 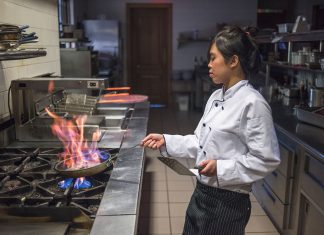 Commentary: Why have there been so few female lead chefs in Atlanta?

Julia Bainbridge - September 14, 2017
Ever since I arrived in Atlanta nine months ago, I've been wondering: Where are the female chefs? Long have professional kitchens employed women as pastry chefs, but there are still relatively few female headliners, here and elsewhere.
Read more 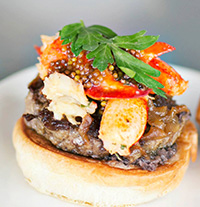 In food news: What you missed last week

Fry's Tex-Mex restaurant to be called Superica
Ford Fry—the chef behind the Optimist, No. 246, King Duke, and more—has named his Krog Street Market Tex-Mex spot Superica, reports Eater Atlanta. The name came from the words "super taqueria." The restaurant will open by early 2014.

Fire at Vine & Tap
Fire broke out at Vine & Tap, the Buckhead wine bar and small plates restaurant by Ian Mendelsohn, this week. Because of that, the grand opening—which was originally set for July—has been pushed back to late September.

HD1 to become FLIP Burger
HD1, the Poncey-Highland hot dog spot by chef Richard Blais, is now closed. The restaurant is being retrofitted as a FLIP Burger Boutique—another Blais creation—and will reopen in eight to ten weeks, according to the Atlanta Journal-Constitution. The new FLIP location will feature a rooftop patio. Select HD1 hot dogs will be added to the menu.

Dante Stephensen plans to auction off pirate ship décor
Dante Stephensen, founder and namesake of iconic fondue and jazz spot Dante’s Down the Hatch, has announced plans to auction off the restaurant’s equipment and decorations, reports the Atlanta Business Chronicle. Dante’s closed late last month after the land was sold to Atlantic Realty Partners and Behringer Harvard, who plan to build an apartment tower. Stephensen’s auction will take place at the restaurant on September 21, starting at 9 a.m. The $95 entry price includes food, drink, and live jazz.