Watershed fried chicken still elusive after all these years

Wyatt Williams - May 31, 2012
The new Watershed on Peachtree is, in many ways, an entirely new restaurant from the one that once anchored the dining scene in Decatur. With executive chef Joe Truex and chef de cuisine Julia LeRoy at the helm and wide-open dining rooms laden with bare wood and muted colors, the renovated garage and bright quilts that defined the previous space seem to be a faint memory. The legacy of Scott Peacock and Edna Lewis might not even cast a shadow were it not for fried chicken night.
Read more

James Oxendine - May 9, 2012
Last week the team behind the forthcoming Watershed on Peachtree revealed Julia LeRoy would become the kitchen’s chef de cuisine, working alongside executive chef Joe Truex. LeRoy, a graduate of the Culinary Institute of America, has pursued a diverse cooking career: She cut her teeth at the Dining Room at the Ritz-Carlton Buckhead and Seeger’s and led the kitchen previously at the Bookhouse Pub and her short-lived LeRoy’s Fried Chicken. Just prior to her new post at Watershed, she worked as the consulting chef for the menu at Decatur’s Pinewood Tippling Room, which opens on May 15. Q: What were the deciding factors in making the decision to join the Watershed team?JL: I think one of the main reasons I wanted to join the Watershed team is because I have enormous respect for Joe’s approach to food. I would dine at Repast any time I could talk someone into taking me and I think he’s done a great job transforming the new Watershed menu into his own. He and I are opposites in a lot of ways, but we get along really well and I think that shows in our collaborations. Q: How did you meet Truex?JL: We were on a panel together at the 2011 Taste of Atlanta and started talking then. I was in the middle of shutting down my fried chicken restaurant and kind of stressed. We talked after the event and found out we had a food ideas in common. We worked together almost a year doing dinner parties before I decided to join the Watershed team.I signed the contract on my birthday, April 20th. Q: What are some of the new items you will be introducing to Watershed’s menu?JL: I’m not ready to divulge the fruits of those collaborations yet, but I think you’ll be pleased. But Joe and I plan on expanding Watershed’s current menu with flavors from the Georgia Coast, the Louisiana Bayou and the diverse ethnic flavors found throughout the South. Q: Will you be doing the fried chicken now?JL: The fried chicken is going to be the same recipe as it’s always been. It’s a vertebra in the backbone of Watershed and I have no desire to change that. I’m sure I will be making the fried chicken from time to time, but it will be the tried and true Watershed recipe I follow.Q: You have been serving as consulting chef to the Pinewood Tipping Room in Decatur, how is that project coming along?JL: I have wrapped up the menu [which includes dishes like fried bologna sandwiches gussied-up funnel cake], and it is similar to the food I prepared at Bookhouse. NEWS AND NOTES:The biggest news of the week, of course, is that Hugh Acheson and Linton Hopkins tied for the title of Best Chef Southeast at this year’s James Beard awards announced on Monday. ( On Friday, at the ceremony for cookbooks, journalism and broadcast media, Acheson also received a Beard award in the American Cooking category for his cookbook, “A New Turn in the South.” The founder of R. Thomas Deluxe Grill, Richard Thomas, was featured  in a Huffington Post piece about his personal journey from President of KFC to founding what the article calls “Atlanta’s healthiest restaurant”. The Southern Food Writing Conference and the International Biscuit Festival will be held jointly in K
Read more

James Oxendine - November 22, 2011
ATL Food Chatter: November 22, 2011 (To receive the Chatter and other culinary tidbits directly in your inbox, sign up for our weekly dining newsletter)The “new” Watershed restaurant, set to open in Spring of 2012 in South Buckhead’s Brookwood Condominiums at 1820 Peachtree Road, is being designed by Smith Hanes. A master at creating a casual dining environment that mixes urban and rustic elements, Hanes has won praise for his previous work at No. 246, JCT Kitchen and Bar, and Bella Cucina. He will also design the spaces for Ford Fry’s next project, The Optimist and its adjoining oyster bar.
Read more 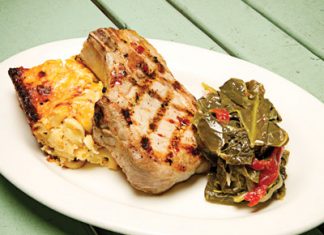 Bill Addison - February 1, 2011
Note: This location is now closed and has reopened in Buckhead as Watershed on Peachtree.

If we were to play a restaurant version of word association, what would come to mind if someone shouted "Decatur"? My instant response is "Watershed." It has stood solid for twelve years, becoming an anchor of the community as condo buildings materialized along West Ponce de Leon Avenue and Decatur’s dining scene found its burger-and-craft-beer-loving soul.

Atlanta chef Joe Truex dishes about his plans for Watershed, the future of Repast

Richard L. Eldredge - May 20, 2010
In the end, it was a mix of mama and a day spent with the legendary Alice Waters in his hometown of Mansura, Louisana this spring that led Joe Truex to Decatur's Watershed restaurant.
Read more
12Page 2 of 2