Home Uncategorized The Battle of Atlanta 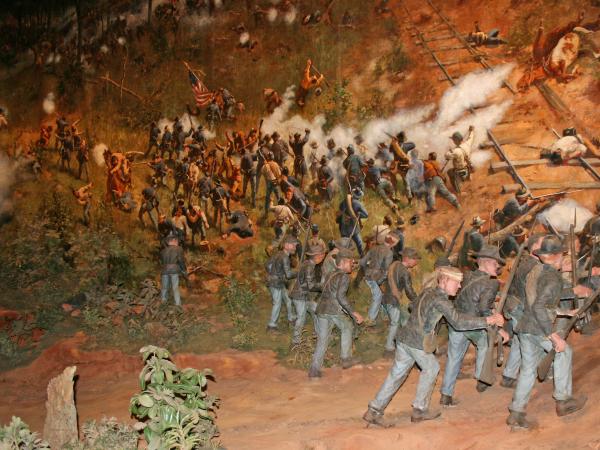 “The Battle of Atlanta” sounds pretty definitive. And it’s understandable that the average person, not steeped in Civil War martial minutia, might consider this to be the dramatic and fiery destruction of the city (i.e. that famous flaming scene in Gone with the Wind.) But in fact, the battle waged in Atlanta on July 22, 1864 was just one step of the Atlanta Campaign, a months-long effort that didn’t reach its blazing conclusion until the fall.

Nonetheless, the one-day Battle of Atlanta was a brutal event, resulting in 12,000 casualties. Confederates failed to stop Union forces from circling the city, in preparation for the siege that would ultimately contribute to Atlanta’s fall and destruction. The battle is the subject of the famous painting at the Cyclorama (detail above), perhaps also contributing to its aura of decisiveness.

During the July battle, city residents had not yet been evacuated. Sam Richards, whose diary provides a remarkable account of everyday life in Atlanta during that era, wrote on July 23:

We have had a considerable taste of the beauties of bombardment today. The enemy have thrown a great many shells into the city and scared the woman and children and some of the men pretty badly. One shell fell in the street just below our house and threw gravel in our windows, they say. This seems to me to be a very barbarous mode of carrying on war, throwing shells among women and children. The city authorities required me to do police duty and I had to stand on guard on McDonough St. from 8 to 10 and 2 till 4 this night, and carryed (sic) a musket for the first time in my life! My wife and children had to put their beds on the floor behind the chimney to be secure from shells which were thrown into the city all night long. No more fell near our house, however, and but little damage was done anywhere. 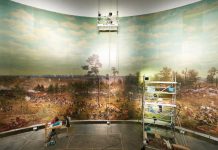 Redeeming the Cyclorama: Why the century-old attraction is anything but a monument to the Confederacy 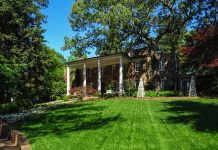 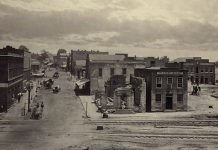