Home Uncategorized Get away to Washington, D.C. 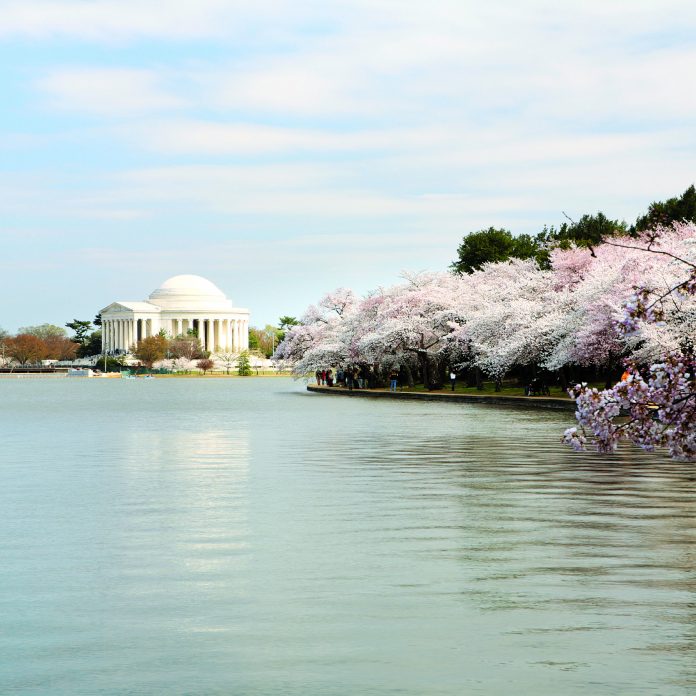 Gazing at the cherry trees in our nation’s capital may be a touristy cliche, but strolling among the blossoms in full blush, usually between late March and early April, tends to silence objections. The scene is dreamlike. Along the path around the Tidal Basin, between the Potomac River and the south end of the National Mall, a crush of branches explodes with clusters the color of cotton candy (more delicate and pale than Georgia’s pink-flowering dogwoods). Japan gave 3,020 of these trees to the U.S. as a token of friendship in 1912, and the annual Cherry Blossom Festival—held this year between March 20 and April 14, with a parade on April 13—began in 1935.

The Thomas Jefferson Memorial sits on the southeast corner of the Tidal Basin. Its site stirred public disapproval when chosen in 1937, as some cherry trees had to be removed. Memorials always rouse controversy of some sort, it seems. When the Martin Luther King Jr. Memorial was completed opposite the Jefferson Memorial in August 2011, another uproar arose. An inscription on the side of the thirty-foot statue misquoted King as saying, “I was a drum major for justice, peace, and righteousness.” The line abridged comments King made in 1968, two months before his assassination. Critics, including poet Maya Angelou, asserted it made King sound arrogant. The Interior Department agreed to remove the quote this year.

Yes, a trip to the nation’s capital naturally includes politics, monuments, and museums. Every visitor discovers a favorite. I’m partial to the Asian-themed Freer Gallery of Art, part of the Smithsonian complex, and the International Spy Museum, which currently features Exquisitely Evil: 50 Years of Bond Villains. But D.C.’s food options haven’t always been as engaging. Growing up in Maryland, dining excursions here with my family meant either staid steakhouses, French bistros, or, as an adventurous teenager, an occasional utensil-less Ethiopian meal.

These days, though, the city’s booming restaurant culture lays out a cornucopia of sophisticated tastes, both local and global. The newest sensation is Union Market, a warehouse in the city’s northeast corner revamped into a gleaming food hall with artisan producers and pop-up dining options. Sidle up to the counter at Rappahannock Oyster Bar, the market’s first permanent restaurant, for a sampling of raw bivalves, a sustaining bowl of oyster chowder, or a meaty crab cake. On the opposite end of the spectrum, serious food lovers line up early at Little Serow, located near the city’s hip Dupont Circle neighborhood, for what is arguably the finest Thai food on the East Coast (no reservations). A $45 prix fixe meal transports the taste buds to the northern Isan region of Thailand, and the revolving menu includes dishes like a salad of grilled and chopped snakehead fish with chiles and rice powder. A fan of Top Chef? Bryan Voltaggio, who competed against Kevin Gillespie in season six, opened glittery Range in December. Look for small plates like kimchi linguine with uni and bay scallops, scattered with nasturtiums.

True to D.C.’s nature, the nation’s recent meteoric interest in gastronomy has inspired a permanent exhibition at the National Museum of American History called Food: Transforming the American Table, 1950–2000. The centerpiece is Julia Child’s charmingly cluttered kitchen, transported intact from her home in Cambridge, Massachusetts.

During a recent visit I stayed at the Jefferson hotel, a beaux arts jewel box four blocks from the White House. Standard rooms are smallish but plush. A bar off the hotel’s restaurant, Plume, pours ancient Madeiras (one of oenophile Thomas Jefferson’s passions). But for atmosphere I prefer Quill, a dim lounge across the lobby where politicos hold hushed tête-à-têtes and bartenders craft a restorative hot toddy. The experience is a quintessential D.C. nightcap.