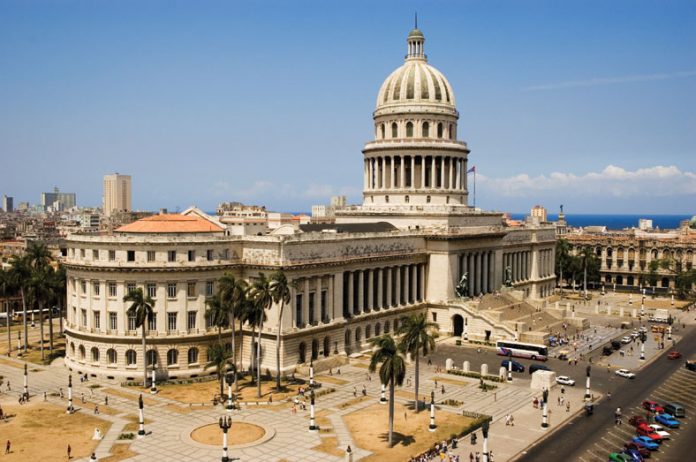 Just ninety miles from Key West, Cuba remains undiscovered country to most Americans, thanks to an embargo dating back to 1963. Last year, President Obama lifted restrictions on Cuban Americans’ visits. But the rest of us still need a legal excuse, whether it’s professional, educational, or humanitarian. Still, thousands of Americans go every year without a license, traveling via Mexico or Canada. Technically, they risk six-figure fines. We visited earlier this year, and here’s what we found.

DO
Wander Calle Obispo, a popular walkway in Old Havana, and order a mojito at cafe La Dichosa. It’s a block from the capitol and less touristy than Hemingway’s Bodeguita del Medio, where the daiquiri was invented. Hail a pre-embargo ’57 Chevy convertible taxi for a 30-minute ride to Playa Santa Maria, where beach chairs and cold drinks cost a few pesos. For a small sum, the cabbie will wait and escort you back to Havana in time for a midafternoon Industriales (Cuba’s Yankees) game. Visit the Museo de la Revolución, where Fidel’s version of history is displayed in an old presidential palace, then stop by the Partagas cigar factory—the oldest in Cuba. Buy a Cohiba and smoke it along El Malecón, a wide walkway where Havanans of all ages gaze toward Miami.

STAY
The 80-year-old Hotel Nacional overlooks Havana Bay and El Malecón and boasts a breezy 19th-century veranda for smoking the hotel’s selection of Churchill and Lusitanias cigars—as Buster Keaton, Errol Flynn, and Lucky Luciano did before the revolution. The hotel is luxurious but also somewhat insulated from everyday Cuban life. Closer to the heart of town is the Spanish Colonial Hotel Sevilla along the vibrant Paseo del Prado promenade. It’s cheaper than Hotel Nacional and offers a stunning rooftop bar, where Graham Greene drank rum and penned Our Man in Havana. Have a few sniffs of the Havana Club 15 Year, then, if you’re too soused to walk, grab a pedicab for a slow ride around the crumbling colonial splendor of Old Havana at night.

EAT
Many of the ingredients Miamians use to cook really good Cuban food simply aren’t available, and much of the seafood catch that’s not taken to touristy restaurants is left to rot on the docks. But there are exceptions. Cajitas (meaning “little box”)—sold on the sly out of homes—are full of rice, black beans, salad, plantains, and a sliver of pork and cost about a dollar. Restaurants in Havana are a gamble, but piano bar La Roca serves moderately priced seafood and chicken ($50 for three entrees and a bottle of wine), and nearby La Torre offers overpriced but delicious American entrees on the 33rd floor of a hotel. Dessert? Head back to Calle Obispo for 25-cent strawberry ice cream sold through a window by an old Cuban woman at a little shop called La Copelia.