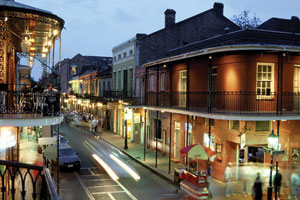 Mardi Gras is February 16, but whether you set off with your wig and mask or opt to visit during a calmer weekend, revived spirits are palpable in New Orleans. Debauchery remains on the menu, of course, but the city lures with some serious-minded attractions, the National World War II Museum chief among them. And speaking of menu, the reenergized dining scene inspires new heights of gluttony.

EAT
If we had one day of ultimate feasting, it might begin with chicken and waffles or grits and grillades (a veal stew of sorts) for breakfast at brasserie Lüke, owned by star toque John Besh. Part one of lunch would be fried oysters and the gumbo of the day at Herbsaint, the flagship restaurant of soulful chef Donald Link. Hopefully we’d have room afterward for a dripping roast beef and gravy po’boy at Mahony’s, an acclaimed new sandwich shop. Before dinner, we’d swing by cool spot Cochon Butcher for a glass of rosé and a plate of charcuterie made on the premises. And we’d conclude at the city’s most refined dining destination, Stella! Chef Scott Boswell loves globally sourced luxury ingredients, but his food still tastes quintessentially New Orleans.

DO
Last year, the National World War II Museum unveiled a new, 70,000-square-foot building, the first phase of a $300 million expansion. It includes a restaurant called the American Sector, but the true highlight is a thirty-five-minute interactive film called Beyond All Boundaries, produced and narrated by Tom Hanks. Special effects such as fog, simulated snow, and floor rumblings give the audience a sense of what soldiers experienced. After war, time for merriment. Of the several raucous bars on Frenchmen Street in the Faubourg-Marigny section of town, D.B.A. draws the best music acts and has the largest beer selection. Donna’s, a welcoming dive at the edge of the French Quarter, is a classic spot to end the night and hear live jazz from a brass band.

STAY
If you want to be near enough to the French Quarter to stroll through as you please but prefer to avoid the nightly commotion, the International House in the Central Business District sits two blocks away from the Quarter and close to many excellent dining options. Rooms can be smallish, but comfortable beds and Aveda shower products compensate nicely. Currently, the hottest hotel property is the grand Roosevelt New Orleans, originally opened in 1893 and closed after Hurricane Katrina. Hilton Hotels, under its luxury Waldorf-Astoria division, bought the historic property and shelled out $145 million to restore the hotel’s breathtaking tiled lobby as well as its legendary performing venue, the Blue Room. It’s worth a cab ride just to take a gander at the place and sip the signature cocktail at its storied Sazerac Bar.