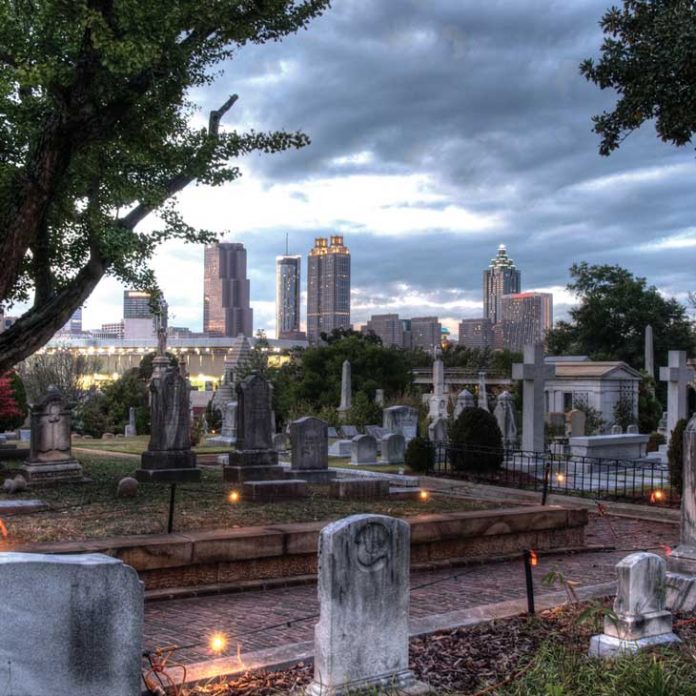 So you’ve got out-of-town guests who came south looking for moonlight and magnolias. Where do you take them for a dose of local color in a metropolitan place like Atlanta? Here’s where:

ROSWELL Looking for white columns? Visit three historic houses in Roswell: 1) Bulloch Hall, circa 1839, was built by the maternal grandparents of President Theodore Roosevelt, who were also great-grandparents to Eleanor Roosevelt. 180 Bulloch Avenue, bullochhall.org 2) Barrington Hall, a Greek Revival mansion, was completed by the town’s cofounder, Barrington King, in 1842. Serving as headquarters for a Union general during the Civil War, the house remained in the original family until 2002. 535 Barrington Drive, barringtonhall-roswell.com 3) Archibald Smith Plantation Home, circa 1845, belonged to wealthy cotton farmers. The grounds include slave quarters, a cook house, and other original outbuildings. 950 Forrest Street, archibaldsmithplantation.org

Swan Coach House The ladies who lunch may no longer wear white gloves, but they still dine on frozen fruit salad, cheese straws, and swan-shaped meringues in a floral-papered dining room. The restaurant supports the Forward Arts Foundation, a key benefactor of Atlanta’s visual arts scene since 1965. While you’re on the grounds, be sure to visit the Atlanta History Center and the Philip Trammell Shutze–designed Swan House. 3130 Slaton Drive, 404-261-0636, swancoachhouse.com

Beverly Bremer Silver Shop You don’t have to know an epergne from an eggcup to gawk at the glass cases and felt-lined wooden drawers inside this nearly forty-year-old institution. It’s where your momma could’ve selected her wedding flatware, which is exactly the point. 3164 Peachtree Road, 404-261-4009, beverlybremer.com

The Wren’s Nest This Queen Anne Victorian abode was the home of Joel Chandler Harris from 1881 to 1908. An associate editor of the Atlanta Constitution, he was better known for authoring the Uncle Remus books, based on African American folk tales. The museum contains many original furnishings and now serves as an educational center dedicated to African American storytelling. 1050 Ralph David Abernathy Boulevard, 404-753-7735, wrensnestonline.com

Martin Luther King Jr. National Historic Site You’ll want to start with the visitors center, but the highlights of this district include MLK’s childhood home and Ebenezer Baptist Church, where he was baptized, served as pastor, and was memorialized at his funeral. The sanctuary has been restored to its 1960s appearance, when MLK and his father were copastors. The historic district is along Auburn Avenue, once known as “Sweet Auburn, the richest Negro street in the world.” 404-331-6922, nps.gov/malu/index.htm

Mary Mac’s Tea Room This sixty-seven-year-old institution is beloved for both its authentic regional fare (fried chicken, collards, fried okra, etc.) and its quirky traditions, like free potlikker for first-timers and pencils for customers to check off their own orders. Goodwill Ambassador Jo Carter will likely stop by to give you a back rub. 224 Ponce de Leon Avenue, 404-876-1800, marymacs.com

Oakland Cemetery Shaded by magnolias and scented by camellias, this Victorian-era cemetery is the final resting place of six governors and twenty-seven Atlanta mayors, including Ivan Allen Jr. and Maynard Jackson; notables like Bobby Jones and Margaret Mitchell; and unnamed paupers. The elaborate monuments and mausoleums—such as the famous “Lion of Atlanta” marking the graves of 3,000 unknown Confederate soldiers—and verdant landscape were designed to inspire the living as well as honor the dead. 248 Oakland Avenue, 404-688-2107, oaklandcemetery.com

Margaret Mitchell House Tara was purely fictional, but Gone with the Wind tourists can visit the apartment where Mitchell and her husband John Marsh lived while she wrote the novel. The rest of the Tudor Revival building is now a literary center. 990 Peachtree Street, 404-249-7015, margaretmitchellhouse.com

Paschal’s Restaurant Though no longer in its original location, this soul food restaurant was the meeting place for civil rights leaders. Its La Carousel Lounge often hosted entertainers like Aretha Franklin, Ramsey Lewis, and Dizzy Gillespie. 180-B Northside Drive, 404-525-2023, paschals­atlanta.com

Photograph of Oakland Cemetery by Ren Davis. This article originally appeared in the November 2012 issue.