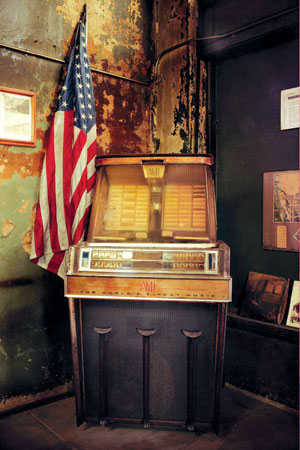 At Louie Mueller Barbecue in Taylor, Texas—about thirty-five miles northeast of downtown Austin—I pick up my butcher paper–lined tray from the counter, walk past neon beer signs and a collage of business cards pinned to a singed-looking wall, and plant myself at a communal table with one other fellow. The scent of smoldering oak has already saturated my clothes. I study my lunch: one large pork rib, its top black and crackly, its smoke-infused meat the color of strawberry ice cream; a fat, glistening link of jalapeño sausage; a hunk of brisket, its marbled patterns as mesmerizing as the grains in a tree stump; and a monster beef rib—a pound and a half of molten meat, crusted with black pepper, attached to a bone thick and long enough to be dangerous in a scuffle.

I look over at my tablemate. The badge pinned to his shirt identifies him as a visiting technician at a nearby medical center. His tray contains a few wan slices of turkey. He glances at my alarming amount of food, and I point to the beef rib. “I can’t possibly eat all of this,” I say to him. “Would you like some?” He nods, and I cut off a fist-sized lump. He takes a bite, and his eyes flutter, like he can’t quite believe his taste buds are registering this much pleasure. He gazes down at his turkey. “Wow,” he says. “Clearly I ordered wrong.”

Yeah, you sure did, pal. Pork, turkey, and occasionally lamb may find their way onto restaurant menus, but beef is the a priori protein in Texas barbecue culture. Stellar barbecue flourishes all over the Lone Star State, but a trip to Austin—where lush brisket and piquant sausages dominate—offers the most gratifying immersion course. Satellite towns around the city have traditionally drawn the most hard-core connoisseurs. There are two classic area road trips. The first begins in Taylor with Louie Mueller, which initially was a grocery in 1946 but started selling smoked beef in 1949. A block away is Taylor Cafe, a saloon that specializes in two lean, peppery sausages—beef and turkey. Then head to Southside Market in Elgin, fifteen miles away, which offers a gamut of meats but excels in sausages: Ask for the greasy, ruddy “hot guts” (robust sausage), and throw in an order of satisfyingly gamy mutton ribs.

The second essential trek is thirty miles south of Austin to Lockhart, a town the state legislature decreed “the barbecue capital of Texas.” Arrive early to avoid trailing lines at Black’s, which has been operated by the same family since 1932. Go easy on the side dishes (potato salad, creamed corn, black-eyed peas) on display just inside the door; save room for brisket and a ring of beef sausage. Smitty’s Market a few blocks away has mastered beef clod, a thick shoulder cut cooked into tender submission. And I love the option at Smitty’s of a plain avocado, sliced in two, as a condiment. Lastly, head to Kreuz Market (pronounced “Krites Market”), which began in the building now occupied by Smitty’s, for the brisket, clod, and juicy-crusty pork spareribs.

These days, it’s no longer necessary to leave Austin’s city limits to find transcendent barbecue. Credit thirty-five-year-old Aaron Franklin, whose near-immediate ascent to nationally acclaimed pit master is a modern Texas fable. He began serving barbecue out of a trailer four years ago, using a smoker he’d bought from John Mueller (grandson of Louie), who had previously employed Franklin. The meats, particularly the almost-custardy brisket, attracted so much attention that soon Franklin had the money to move into a recently vacated barbecue joint on the city’s east side. The wait in line at Franklin Barbecue, which opens at 11 a.m. and sells out of meat daily, is now as much of a cultural phenomenon as the food. On advice from friends, I arrived on a Wednesday at 9:20 a.m. It was a chilly, drizzly morning, and there were fourteen people ahead of me. By the time the doors opened, more than a hundred and fifty hungry souls trailed behind me. (The number in line can double on weekends.)

When I sat down twenty minutes later and took my first forkful of brisket, I nearly started speaking in tongues. I’m wary of the word perfect, yet nothing better describes the silkiness, the balance of smoke and salt, the utter carnivorous bliss of this beef. Not only that, but Franklin’s pulled pork (a less common focus in the Texas lexicon) was just as velvety. I’d cheerfully wait in that line again.

Take a barbecue break at dinner and try Uchiko, a Japanese showstopper that riffs on sushi and sashimi (using flavor bursts like pickled green apple, seaweed “tapenade,” and preserved lemon), or Barley Swine, an always-packed storefront that serves brainy small plates like grilled broccoli with fermented chile and duck egg. As you plot further adventures in and around Austin, consult The Prophets of Smoked Meat: A Journey through Texas Barbecue, which is released May 14. The author, Daniel Vaughn, was recently named barbecue editor at Texas Monthly, our sister publication. You have to admire a state so rife with smoked meat that it warrants full-time media coverage.

Hail to the Queen: Why we’re loving Charlotte now