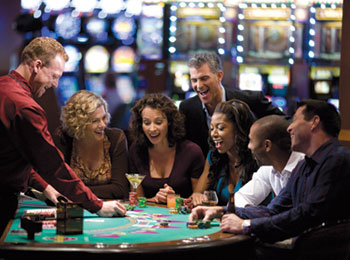 Harrah’s Cherokee Hotel and Casino, Cherokee, North Carolina
This is as close to Atlantic City as you’ll get in the Southeast. Three hours north of Atlanta, Harrah’s Cherokee is in the process of a $633 million expansion and renovation (to be completed by 2012) that includes a third hotel tower, an 18,000-square-foot luxury spa, a Robert Trent Jones II–designed golf course, a new entertainment lounge, and a just-opened 3,000-seat event center where Hank Williams Jr. has already played. Paula Deen’s new eponymous restaurant will open shortly, too. The expansion makes Harrah’s, which also has the most slots and video-gambling games (no cards yet) in a 200-mile radius, the largest hotel and resort—a word it’s beginning to use—in the Carolinas. Outdoors, there are trout to be fished and trails to be hiked in the Great Smoky Mountains, should you need a break from pixelated poker. From $59/night, harrahscherokee.com
Pros Casino revenues are invested into the sovereign nation of the Eastern Band of Cherokee Indians. “Without funding from casino profits,” says a representative, “the Cherokee language would likely become extinct.” Also, as of last year, there’s finally alcohol on the premises.
Con Acrylic trees, nonwater “water” features, smoke-thick air. The attempt at naturalism, as evinced by casino areas with names such as Woodland Moon, doesn’t quite succeed.

Seminole Hard Rock Hotel & Casino, Hollywood, Florida
Only five miles from the Fort Lauderdale airport, the Hard Rock boasts a 140,000-square-foot gaming floor where you can play $10 blackjack 24/7. The twelve-story Mediterranean-style tower is home to limitless shopping and dining. From $199/night, seminolehardrockhollywood.com
Pros Splashy promotions such as a money booth full of flying cash. There is also a 19,000-square-foot pool—with a theme-park-style waterslide—wrapping around a bar disguised as a “towering rock mountain.”
Con It’s a twenty-minute drive to the beach.

Palace Casino Resort, Biloxi, Mississippi
By this spring, the largest casino expansion on the Mississippi Gulf Coast since Hurricane Katrina will be complete. The ballyhooed 64,000 square feet of additions will include 1,000 slots and twenty-six table games, as well as a 300-seat buffet and, at long last, improved air quality. From $59/night, palacecasinoresort.com
Pro The Preserve Golf Club course designed by U.S. Open champion Jerry Pate is surrounded by a nature preserve.
Con It’s a not-particularly-beautiful six-hour drive from Atlanta.