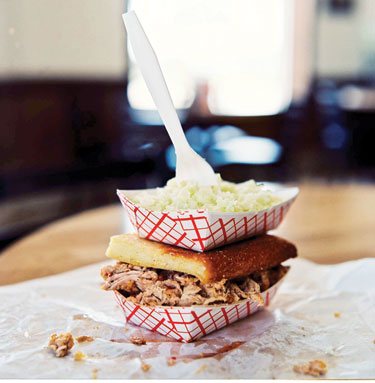 The classic order at the Skylight Inn in Ayden, North Carolina—about ninety miles from Raleigh—is a tray, rather than a sandwich, that includes a small red-and-white-checkered tub mounded with frilly, pink-beige pork; a thin, rectangular slab of unsweetened cornbread glossed with hog fat; and a boat of milky, minced coleslaw. These come stacked atop one another, a balance of barbecue and gravity that the counter staff long ago mastered. Combined, the flavors warm like spring’s first 72-degree days. A vinegar concoction sits on the tables, though you’re not encouraged to use but a splash. “We don’t spend all that time cooking so you can douse it in sauce,” Samuel Jones, grandson of Skylight founder Pete Jones, told a group of us last June during a field trip organized by the University of Mississippi–based Southern Foodways Alliance. “My grandfather said you could make a napkin taste good if you put enough sauce on it.”

Jones’s comment twists the knife in a long-standing rivalry. His tribe, the Eastern-style North Carolina barbecue virtuosos, believes in whole-hog barbecue lightly sauced with seasoned vinegar. Their Western North Carolina counterparts favor just the pork shoulder and prefer more liberal amounts of a sauce that also includes ketchup or other tomato-based flavoring. To my outsider taste buds, both variations appeal. Atlantans, though, can find barbecued shoulder by way of pulled pork sandwiches. On the other hand, I don’t know of any restaurants in even the farthest reaches of our metro area that tackle whole-hog ’cue. So when I’m in the Tar Heel State, I tend to direct my curiosity and appetite eastward.

Peering into the operations behind the Skylight provides instant schooling on the whole-hog barbecue creed. Four fireplaces in the two cookhouses burn oak and hickory woods. Their coals fuel three-foot-high redbrick pits, built against one wall and sealed by heavy sheet-metal lids. Inside, butterflied hogs, each weighing 160 to 180 pounds, slowly roast in a close, equally spaced line—a primal pattern that could have been the model for an Escher print.

After the meat cooks overnight, the pork is moved to the Skylight’s kitchen. (You can’t miss the place. Pete Jones, who started the business in 1947, decided this was the “capital of barbecue” and slapped a silver-painted wooden replica of the United States Capitol dome on the restaurant’s roof.) Cooks separate the skin and fat from the meat, which is seasoned only with salt, pepper, vinegar, and Texas Pete hot sauce. All the meat, from every part of the pig, is then chopped and tossed together, with crunchy bits of diced skin and fat folded back in. Every bite is a little different, but it all thrums with a rich, porky twang.

Before you go whole-hog wild, start your barbecue sojourn in the Research Triangle (Raleigh, Durham, and Chapel Hill), which sits roughly in the state’s central divide. Spark your hunger at Allen & Son Barbeque, on the rural edge of Chapel Hill. Keith Allen splits his own hickory wood out back and cooks shoulders in the Western Piedmont style, but then chops them coarsely and seasons them with a peppery, vinegary sauce a la the Eastern coastal plains. The mingled approach attunes the mind and palate for the journey ahead. Order a plate with slaw and a medium-thick Brunswick stew that rivals Harold’s lauded version in Atlanta.

In the heart of Eastern barbecue country, an hour and a half way, beeline for Ayden not only for Skylight but also to continue the feasting at Bum’s a mile up the street. The meat there gives off a whisper of smokiness and isn’t chopped quite as finely as at Skylight, leaving satisfying chunks in the mix. Don’t miss the greens, Bum’s side item specialty, also given a pleasingly inelegant cleaving. (Ayden fancies itself the “collard capital of the world” and holds a collard green festival every September.)

Two directions from Ayden lead to crave-worthy ’cue. Head north to check out B’s Barbecue in Greenville. (Yes, your GPS is correct: The restaurant does sit on B’s Barbecue Road.) Customers either fill the restaurant or line up at the takeout window, often eating their barbecue—and righteous grilled chicken—with potato salad and green beans on picnic tables. Or steer your car southwest from Ayden for two stellar joints within forty miles. Grady’s in Dudley tosses its ’cue in a sauce riddled with red chile flakes, and each mouthful tingles with heat. Cool the flames with a slice of smooth sweet potato pie. Then try Wilber’s in Goldsboro, where the hot, oblong hushpuppies nearly upstage the pork.

Hungry for more? Bob Garner’s Book of Barbecue: North Carolina’s Favorite Food makes an excellent field guide. And if you need a barbecue breather, drive to Kinston, about thirty miles south of Greenville. You can explore the CSS Neuse, a Civil War–era Navy ship, and have dinner at Chef and the Farmer, a modern Southern restaurant that rolls with the seasons and serves plenty of dishes—including a memorable trout tartare with sweet potato chips—that wholly sidestep pork.