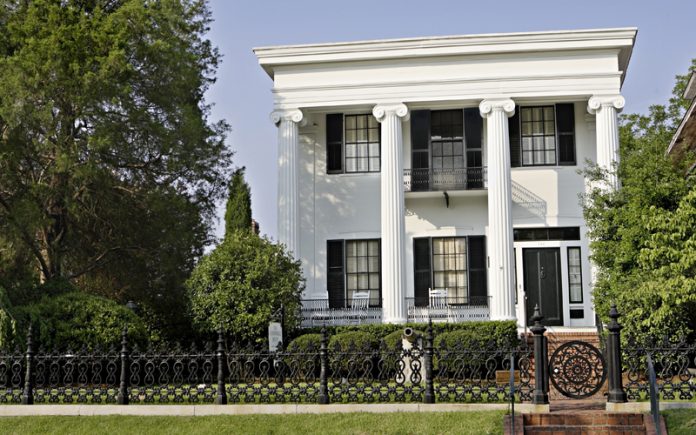 You’ve heard of Union General William T. Sherman’s March to the Sea, but what about the towns his troops didn’t burn at the close of the Civil War? Take a few days to discover the lives and legacies of the 19th-century Georgians on your self-guided tour through seven historic communities that were spared and today provide a window to the rich history of the Old South.

Georgia’s Antebellum Trail is a 100-mile trek through Athens, Watkinsville, Madison, Eatonton, Milledgeville, Gray/Old Clinton, and Macon just east and southeast of Atlanta. Experience lovely Greek Revival and other antebellum architecture in the historic house museums, learn from local tour guides and historians, browse through antique shops, dine on Southern delicacies, and relax in authentic and distinctive bed-and-breakfasts and inns. Welcome to the heartland of Southern hospitality, along Georgia’s Antebellum Trail!

Nestled just below the foothills of the Blue Ridge Mountains, Athens is the northern gateway to the Antebellum Trail. Incorporated in 1806, the city of Athens began as a tiny settlement that emerged shortly after classes commenced at the University of Georgia, the nation’s first state-chartered university. Athens and the university have grown together into one of the top college towns in America.

While visiting Athens, be sure to stop by the State Botanical Garden of Georgia, the Georgia Museum of Art, and the UGA Special Collections exhibits. Guided and self-guided heritage tours provide a glimpse into the past of numerous Confederate leaders. Treat yourself to happy hour at one of the craft breweries or brew pubs, then head to dinner at an acclaimed restaurant. Stay out late at a performance: choose from a Broadway musical at the Classic Center, an international orchestra at the UGA Performing Arts Center, or live music of all types in one of the clubs. Athens is the hometown of R.E.M., the B-52s, Widespread Panic, Drive-By Truckers, and hundreds of other bands that have placed it on top of the charts of live-music scenes.

Athens is the perfect spot to recapture your youthful spirit!

Wander through scenic beauty or step into the past by visiting one of the many historic sites in Watkinsville. The Eagle Tavern Museum, built circa 1801, reveals daily life in frontier Georgia as the center of political and social movements in the area during the 1800s. The Elder Mill Covered Bridge, built in 1897 by Nathaniel Richardson, is located five miles south of downtown Watkinsville and still carries traffic over its wooden trusses. Immerse yourself in the history and influence of the Ashford family with an overnight stay at the Ashford Manor Bed & Breakfast. Here you’ll experience the classic South in an 1893 Victorian home and take in eclectic décor and lush gardens.

History isn’t all they have to offer. Watkinsville, affectionately known as the Artland of Georgia for having more artists per capita than any other city in the state, is home to numerous artists, art galleries, museums, and events. Encounter the ultimate art experience in Watkinsville by shopping galleries, viewing exhibits, touring studios, witnessing demonstrations, and creating art. The largest pottery show in the state (and arguably the Southeast) is hosted in Watkinsville annually. Perspectives: Georgia Pottery Invitational displays and sells thousands of pottery pieces and hosts gallery talks, pottery demonstrations, and workshops throughout the three-week event.

Whether you’re taking a leisurely stroll in downtown Watkinsville, roaming through the many art galleries and specialty shops the city offers, or exploring the area’s antique trail, there is so much to see and do.

Once described in the 1845 Guide to Georgia as the “most cultured and aristocratic town on the stagecoach route from Charlestown to New Orleans,” Madison remains a genteel reminder of the country’s southern beauty and grace spared by Sherman’s torch in his infamous March to the Sea. In 1864, Madison lay in the path of approaching Federal forces. Fortunately, Madison attorney, former U.S. Senator, and staunch Unionist Joshua Hill met with Sherman’s approaching General Slocum, who agreed to spare the city; his forces burning only the industrial and railroad facilities that supported the Confederacy.

Today, as evidenced through many years of thoughtful preservation, Madison remains a true architectural gem of the past, earning it a place on Budget Travel Magazine‘s list as one of the “World’s Most Beautiful Towns.” And also boasting one of the largest historic districts in Georgia, Madison delivers no shortage of history and heritage to explore: from an impressive 1895 Romanesque Revival school building to a collection of over 50 antebellum homes, including the Joshua Hill home, a private residence today.

Be sure to stop in at the welcome center (housed in an 1887 firehouse) where staff can assist with downloading a free audio walking-tour app. Let this valuable resource be your guide during your excursion, showcasing the many places where history and lore line the streets. After strolling or bicycling past antebellum architecture, make sure to re-fuel at one of Madison’s unique downtown eateries, shop for antiques and treasures, and close out your day soaking in the South at one their charming B&Bs.

Eatonton is nestled between Lakes Oconee and Sinclair and the Oconee National Forest. Visitors are welcome to enjoy the wide waters and gentle green landscape of Putnam County’s Lake Community or stroll through the streets of downtown to admire some of the South’s most unique antebellum architecture. Eatonton has a rich literary history and has produced two famous writers: Alice Walker and Joel Chandler Harris. To this day, folks around Eatonton enjoy many a good tale—from the fisherman telling the story of “the one that got away” to a golfer stretching the truth about the length of his drive to a spine-tingler about a ghost who lives in the house next door, the stories abound. You can learn about the famous stories that originated in Putnam County at the Georgia Writers Museum and the Uncle Remus Museum in downtown Eatonton.

Whether you come for the fishing, golfing, shopping, or historic homes, there is a little something for everyone in the family. It is a time-honored Southern tradition to make visitors feel welcome, and the folks in Putnam County are good at it. Take the time to visit and create your own stories.

Milledgeville, the First Lady of Georgia, boasts stately Southern mansions which have harbored distinguished governors, generals, and ghosts. Her proud history began in 1803 when she became the new capital of Georgia and the only city in the U.S. (with the exception of Washington, D.C.) actually designed to be a capital city. For more than 60 years she reigned until a bitterly-cold November day when Sherman and 30,000 Federal troops marched in Milledgeville. Many area homes and structures survived the periodic fires and willful destruction of the War Between the States.

Today, among the grand antebellum homes lining the streets of Milledgeville there exists a wealth of cultural opportunities all within walking distance. Hop on board an authentic trolley and tour historic sites, including an 1852 Greek Revival-style home, Rose Hill. Follow in Sherman’s footsteps at Georgia’s Old Governor’s Mansion. Visit Andalusia Farm, which provided inspiration for one of America’s greatest authors, Flannery O’Connor, and served as the setting for many of her stories and characters. To explore the great outdoors, kayak or canoe on the meandering Oconee River, and practice yoga in its pristine park. Hike along the famous Bartram Trail or go boating on Lake Sinclair.

Milledgeville is both a modern, trendy college town and grand, historical hub. Her perfectly-charming downtown is home to locally-sourced restaurants and original live music, steps away from fascinating museums and funky antique stores. Take a drive and make a date with Milly today.

Visit another era, or play in this one! From adventure to heritage to recreation, all sprinkled with a little bit of soul, you’ll enjoy nearly-endless pursuits to fill a day—or week—in Gray, Old Clinton, and the rest of Jones County.

Plan your visit for the first weekend in May to attend Old Clinton War Days, a heritage festival which includes the reenactment of two significant events that occurred during Sherman’s March to the Sea. Year ’round, take a self-guided or guided (by reservation) tour of the historic district, providing glimpses into the past of a 19th-century county seat, including the earliest-surviving house and small one-room school museum.

South of Clinton, located on the Georgia Civil War Heritage Trail (which follows the path of Sherman’s Right Wing through Georgia), is the Griswoldville State Historic Site, once home to a Confederate pistol factory. The area is dotted with historical markers describing the town and the Battle of Griswoldville.

Northwest from Clinton, near Juliette and the Ocmulgee-Piedmont Scenic Byway, one can imagine life on an 1850s cotton plantation as you walk the grounds of the Jarrell Plantation State Historic Site. Only a half mile from the Jarrell Plantation, hike through the woods along the Hitchiti Nature Trail, a four-mile loop that follows Little Falling Creek, or visit the nearby Piedmont National Wildlife Refuge. The refuge is home to several endangered species and offers fishing, hunting, camping, and excellent bird-watching opportunities for the nature enthusiast.

Macon is an engaging and welcoming city that invites you to stop by and take time to explore the beautiful architecture, Native and African-American histories, and musical legends.

Our story begins with Native Americans at the site of Ocmulgee National Monument, where you can see inside North America’s only reconstructed earth lodge, stand on top of temple mounds built by the Mississippians, and explore 17,000 years of continuous human habitation.

The Johnston-Felton-Hay House, lovingly dubbed the “Palace of the South,” was built by newlyweds inspired by the art and architecture seen on their European honeymoon and furnished with purchases from their trip. Tour the 24 principal rooms of this seven-story mansion adorned with an 80-foot cupola, adding grandeur and flair to the Italian Renaissance Revival architecture adorning this mansion.

Macon, “Where Soul Lives,” has been the home to many famous musicians. Otis Redding, Little Richard, the Allman Brothers Band, Chuck Leavell, and Jason Aldean are just a few of the artists whose musical careers took off in Macon. The road still goes on forever at the Big House, the Allman Brothers Band’s former home turned into a museum, which houses the largest collection of band memorabilia in the world.

It’s more than a place on a map. It’s a vibe all its own. We invite you to come experience Macon!