When it comes to places that people come back to year after year, none are quite as special as Pawleys Island, South Carolina. Set between Charleston and Myrtle Beach, and less than six hours from Atlanta, the town was originally a summer resort. First settled in the 1700s, Percival Pawley developed a rice plantation here that eventually earned the island its name. Later, in the 1800s, this area became known as a rice producing giant. Today, it has around 100 full-time residents that welcome visitors as if they were locals.

So, what makes Pawleys such a beloved place? Perhaps it’s the great outdoors, including quiet beaches and inlets ideal for kayaking, fishing, and crabbing. Or maybe it’s the shops selling uniquely local goods like the Pawleys Island Hammock, found at the famous Hammock Shops, and Palmetto Cheese, regarded as the best brand of pimento cheese. Of course, there are also historic inns and cozy rental homes that make your stay relaxing, like the Sea View Inn and Pelican Inn.

Atlanta resident Caroline Johnson has been going on vacation to Pawleys Island since she was born, following her mother’s tradition of doing the same. They drove from her hometown of Darlington, South Carolina before later moving to Georgia. Growing up, they would stay with her mom’s family and friends, making it a family reunion of sorts, but later rented different houses on the island.

Over the years, she and her family have developed a number of favorite spots: “We always visit The PIT (Pawleys Island Tavern) and we always like to stay on the south end because that’s where the island comes to a point so we can go fish there.” Hog Heaven BBQ and Applewood’s House of Pancakes are newer traditions, found during the trip to Pawleys for Johnson’s wedding.

The Pawleys Island Chapel is one of the most photographed spots in town and holds a special place in Johnson’s heart. “My grandma and I, every summer when we were there, would always go to the chapel and it would just be us two for the sunrise service. So I always knew that I wanted to get married there.” She ended up tying the knot in that very chapel on her grandmother’s birthday, one of only two dates the chapel was available.

The Hammock Shops is another favorite of Johnson’s for its fudge. A famous Pawleys Island hammock on their own back deck at home is a constant reminder of the special place. These days, she visits the island with the next generation of travelers. “It was the first beach trip for both of my kids. They both went before they were six weeks old.”

Knoxville resident Dr. Abby Blackmon is likewise enamored with the island, having started her trips there at nine years old with her mom, brother, and family friends. They had such a good time that they went back later in the summer with the extended family. She’s been going back for 40 years, first with her parents and later with her own kids.

One of her favorite memories was when she brought her young children with her parents, brother, and maternal grandparents. It was the last trip to Pawleys with them, and the Blackmons recorded stories told about World War II and her grandfather’s time fighting in Papua New Guinea.

Her family has stayed in a few houses on their visits, but prefers the southern side of the island. “For 15 years, we’ve stayed two weeks at Liberty Lodge, one of the oldest houses on the island. It was moved across the marsh to its present site in 1849.” It’s here they have a lowcountry boil every trip, with her husband’s hushpuppies and fresh seafood dumped onto newspaper-lined tables.

Like other families, the Blackmons never miss a trip to the Hammock Shops for fudge and t-shirts. They also have a Pawleys Island hammock at their home. It’s an important reminder of her “heart’s home,” even seven hours drive away. “I have to go back. I’m not whole any place in the world but Pawleys Island.” 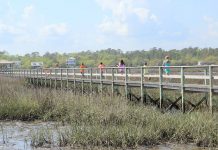 Pawleys Island is one of the South’s best-kept secrets