Home Uncategorized Traveling to Memphis? Here’s what to eat and do

Nashville may be known as “Music City, U.S.A.,” but it’s Memphis that can lay claim as the birthplace of rock ’n’ roll. Home to Sun Studio, Stax Records, and—of course—Graceland, it played a central role in the history of early rock, blues, and soul music. And then there’s the barbecue. But this Mississippi River city offers more than Elvis and top-notch ribs. You’ll also find a wealth of civil rights history, hip bars, and one of the country’s largest urban parks.

What to do
Built around the Lorraine Motel room where Martin Luther King Jr. was assassinated, the poignant National Civil Rights Museum chronicles the movement from slavery through the present. The 4,500-acre Shelby Farms Park is home to a BMX racetrack, more than 20 lakes for fishing, and even a herd of buffalo. For an oddly peaceful retreat, visit the Crystal Shrine Grotto, a crystal-lined man-made cave inside Memorial Park Cemetery.

Music history
Elvis Presley, Johnny Cash, Jerry Lee Lewis, and Howlin’ Wolf all got their start at Sun Studio, which still operates as a recording studio at night, offering visitor tours during the day. Across town, the Stax Museum tells the history of soul music in Memphis, featuring wild displays like Isaac Hayes’s circa-1973 24-karat gold-trimmed Cadillac Eldorado.

Where to stay
Downtown, the circa-1925 Peabody Memphis—with ducks paddling about its lobby fountain—is an opulent mainstay. Elvis fans should check out the new Guest House at Graceland. Find tasteful Elvis-themed decor and a theater where guests can screen Elvis movies and hear local bands.

Where to drink
Beale Street is the famous nightlife strip, but for a more low-key evening, drop by Earnestine & Hazel’s, a supposedly haunted dive bar with live music. In Midtown, order a retro cocktail at the nautical-themed Cove, or knock back a pilsner at nearby Wiseacre Brewing. 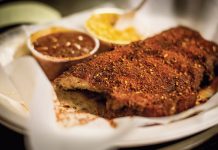