As weed whackers thwacked yard-high grass and tangles of kudzu along the fence at Boulevard and Boulevard Place, they also disrupted a couple of anthills. The dislocated insects marched out across the sidewalk and over the feet and ankles of Reverend Joseph Crawford.

“Ants! You’re making me do a holy dance!” exclaimed the pastor as he shook the bugs off his feet. “But I don’t care. I’m just so glad to see this mess getting cleaned up.” As he danced out of the way of the angry ants, a huge City of Atlanta mower roared through the lot, which has been vacant and debris-choked for close to a decade, according to Crawford, who shepherds the flock of Fort Street Memorial United Methodist Church across the street.

A half-hour earlier, Reverend Crawford had delivered the invocation kicking off the Year of Boulevard cleanup day. “We are thankful, Lord, that you set your sun blazing and held the rains back,” he said. Then he urged the participants to thank themselves for taking part in “a harambee experience,” using a Swahili word that means “all pull together.”

More than 250 people gathered in the church parking lot on this sunny Saturday morning to pull together on the first community cleanup day in the Year of Boulevard initiative spearheaded by city councilmember Kwanza Hall’s office. Before the hard work started, there was a brief celebration: the culmination of the TEDx Atlanta “Wish” fundraising for programs serving kids in the Boulevard corridor. Oversized checks totaling $50,000 were presented to Rashid Nuri, director of Truly Living Well urban farm, which runs a summer camp at the nearby Wheat Street Gardens, and Edna Moffett, founder of Operation P.E.A.C.E., the neighborhood after-school and summer program. “We’re happy to be part of the Year of Boulevard, and this is just a start,” said Imara Canady, a coordinator of the TEDx effort. In a last-minute addition to the agenda, Matthew Garbett, president of Fourth Ward Neighbors, presented a surprise check for $2,640. “We’re pledging to send three kids to camp for the summer, and we plan to do more,” he said. After the cheering and photo-ops with the big checks, the volunteers were sent out to work in teams. “When we had the first conference calls planning this, we thought it would be great if we could get a hundred people to show up,” said Lacy Barnes, senior events administrator in Hall’s office. Midway through the morning. She’d tallied 235 names on the volunteer registration sheets. Volunteers included Atlanta Medical Center staff, like Deborah Green who brought along her kids Quintin, 12, and Deandrea, 16; neighbors like Andrew Pletcher, who moved into a loft on Ralph McGill in February; TEDx techies; hippie-ish college students; and even a few citizens from the nearby high-rises. Major Keith Meadows, who runs the Atlanta Police Department’s Zone 6, which includes Boulevard, was there in his civilian clothes, a white YO Boulevard! T-shirt and a baseball cap. Operation P.E.A.C.E. kids and their families were present en masse, including three generations of the Humphries family (above)—grandmother Constantine, mom Tiera, and six-year-old Tobias, who goes to Operation P.E.A.C.E. after school and enjoys getting help with his homework but likes best “the movies we watch sometime.”

On Boulevard Place, mother-daughter duo Katherine Brown and Jace Taylor were picking up trash—fast-food bags, liquor box cartons, cigarette packages, candy wrappers, and mysterious articles so transformed by rain and weather that they were unidentifiable. It did not take long to fill a big black trash bag. This was Jace’s first volunteer experience. The ten-year-old took her work seriously. Nearby, Dennis Johnson expertly wielded a giant weed trimmer with ease. He has far more experience than Jace; he’s employed by the City of Atlanta, and does this kind of work all week, but was volunteering his time today. “We like to help out in places that need extra attention,” he said. He’s volunteered over in The Bluff before, but this was the first such project on Boulevard. The City loaned equipment (two massive street sweepers, mowers, and other gear) to the effort, and workers donated their time to operate it.

A block or so south, about a dozen people tackled the weeds and trash at 501 Boulevard, a vacant brick apartment building showing evidence of fire damage. Its windows are boarded up and the boards are covered with graffiti. Cops were called over when signs of squatters—pillows, blankets, suitcases—were spotted inside the building. Reginald Crossley, youth commissioner coordinator for Fulton County’s human services department, was busy dragging weeds and branches out to the curb. He was excited to see so many people out. “It’s a great response, and overdue. It’s important to rally people to work together, especially to energize youth.” He was working with “General” Larry Platt, famous to younger volunteers for his performance of “Pants on the Ground” on American Idol, but better known to older folks as a foot soldier in the Southern Christian Leadership Conference; he and Kwanza Hall’s dad took part in SCLC marches together. “I’m old now, but I can still work hard,” he said. About the Year of Boulevard
In January city councilman Kwanza Hall declared 2012 the Year of Boulevard, and outlined an ambitious agenda for the Boulevard Corridor: crime prevention, job training, education reform, economic development, and summer youth programs.
>> Click here for an overview article on YOB from our April issue. 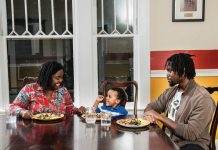 Home for Dinner: Abiodun Henderson, founder of Gangstas to Growers 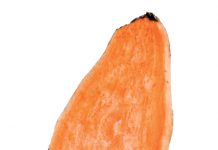