From celebrity fans to boutique studios, indoor cycling has boomed in popularity over the past few years. Torq Cycle Atlanta, which opened this fall on the Westside, isn’t afraid of the competition, though. In fact, it hopes to learn from them. Its classes, which run 35 to 60 minutes and pair spinning with toning exercises, pack the intensity, loud music, and high-tech gear of competitors like SoulCycle and Flywheel. But they skip the other bells and whistles, like glow sticks. $25 single ride; 935 Marietta Street, torqatl.com

Back to Look Good, Feel Good
Back to Best of Atlanta 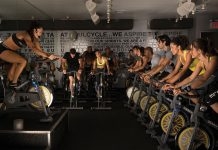