During the Vancouver 2010 Olympic Games, while most Atlantans watched curling and wondered why grown men and women were playing what appeared to be shuffleboard on ice, Jeff Williams and his then eighteen-year-old son Maxwell decided to try bringing the sport to Georgia. Though they’d never touched a curling stone, they created a Facebook group to find others who, like them, “thought it looked fun.” Less than two years later, they’ve unearthed nearly 400 local curling enthusiasts (from middle schoolers to seniors), started holding regular Learn to Curl events, and become the only curling club in Georgia.

Curling involves strategically sliding forty-two-pound granite discs down 146 feet of ice toward a target. Teammates sweep the ice with brooms, which reduces friction and makes the stone travel farther. Members of Knoxville’s Great Smoky Mountains Curling Club donated brooms and loaned stones—which cost $7,000 or more per set—to Atlanta’s developing club, and the Marietta Ice Center provides a venue for events. The ACC hopes to have enough paid members ($100 per year) to start leagues this winter, and the group would like to eventually add kids curling and wheelchair curling and to build its own dedicated facility. The next Learn to Curl event is January 9. For more information, visit atlcurling.org, email atlcurling@gmail.com, or follow @atlcurling on Twitter. 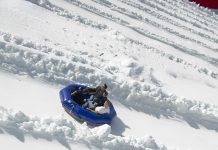 A Southerner’s guide to winter sports