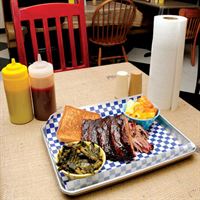 The culinary brains behind PBA30’s “Get Delicious!” are back with another installment of the Atlanta-centric food show. “Barbeque, Bacon, and Other Adventures in Meat” will premiere with a sneak peak at the Plaza Theatre this Sun., July 1, followed by the television premiere on Thur., July 5 and Sun., July 8. In this installment, bearded renaissance man Jim Stacy gallivants across Atlanta (and some nearby places) to taste smoky meats, slice charcuterie, and meet a few farm animals along the way. New favorites, including Heirloom Market BBQ and Pine Street Market, appear alongside the old standbys of Daddy D’z BBQ Joynt and Patak Meats.

We caught up with co-producer Jack Walsh to talk about the show, the latest meat trends in Atlanta, and the complaints they’re already expecting to hear when the episode airs.

Why cover barbeque and cured meats in Atlanta now? We’ve been cooking with smoke and fire since the cavemen days, right?

Jack Walsh: Gordon Ray (the other producer of “Get Delicious!”) and I are big fans of cheesy old instructional films. One we’ve seen a few times and subsequently used in “Get Delicious!” is a NASA movie about how cooking short ribs in the microwave is our space-age culinary future. So, obviously, the new methods aren’t always the best. People figured out centuries ago that slow cooking – whether by smoking, curing, or what have you – is something that can’t be convincingly replicated, even by zapping something with radiation. People still dig barbeque cooked the old-fashioned way, and I don’t really see that changing until a smoke-flavored, liquefied protein derivative is violently forced upon us by our Martian conquerors.

PBA airs an older barbeque show that is kind of out of date, but it still draws gangbuster viewership. We’ve had a really good response to our previous “Get Delicious!” shows, and fans kept asking Jim his opinion on local barbeque places. So, we knew that barbeque covered “Get Delicious!” style just had to be done.

Discussions about barbeque can tend to focus on authenticity and that “We’ve been using my grandaddy’s recipe for so many years” style, but this installment devotes some considerable time to a number of newcomers and innovators in Atlanta’s barbeque scene. How did you decide on what to cover?

JW: Most of what we’ve covered on “Get Delicious!” before has been determined by Jim’s preferences. Most restaurants have been ones he’s well acquainted with and visits frequently. With this one, we thought we’d mix it up a bit more. A couple, like Daddy D’z and Fresh Air, are long-time favorites of his. For some of the newer stuff, though, we sort of kept our ears to the ground. A friend told us about Ms. Betty’s House of Ribs, so we checked it out. They’ve got sauce like nobody else in town, and it’s staffed by some real characters, so they were a natural fit. We’d read about Heirloom Market, and it lived up to its reputation. Plus, the chef being a former Korean pop star was too good a story to ignore. Community Q is my neighborhood favorite, and I kept prodding Jim to give the brisket there a try. We just wanted to vary the content when it came to barbeque. Every place we covered in this show uses a different kind of smoker and is doing something very different from each other. There’s only so much “Here’s Establishment A’s traditional Southern pulled pork. Here’s Establishment B’s traditional Southern pulled pork, Here’s Establishment C’s…” that you can put in a show before it all looks the same. And, to break up the barbeque, we threw in a visit to an organic pig farm, had a cookout in Oakland Cemetery with the creator of the Orion Cooker, made some pastrami at Kosher Gourmet, and visited several charcuteries. Pitmasters know how to use smoke, but barbeque isn’t all that smoke’s good for.

The program covers the growing local charcuterie scene, including Pine Street Market and Patak Meats. What sets these places apart from the crowd?

JW: When it comes to charcuterie, I’d like to say that Gordon and I were pretty knowledgeable going into this, but it’s really just a case of Jim pointing us in the right direction. Jim: “We should do Patak Meats.” Us: “Sound great! Um, what do they have there?”  But, we got up to speed.

Pine Street Market makes great cured meats, some of them fairly exotic, but they’re also very much an old-school butcher shop selling fresh cuts and a bacon that’s made them famous around town. With Spotted Trotter, you’re very likely to find something you’ve never had before. And, all of it is unbelievable. They made me a chicken liver convert. We also wanted to show the range of scale in local charcuterie, and Patak Bohemian Meats continues to turn out delicious smoked and cured meats even as the size of their operation grows. Patak is Czech in origin, but is an Atlanta institution by now. Despite their large-scale, state-of-the-art process, they’re very rooted in old world traditions. One thing that’s not apparent in the show is that when we interviewed Anthony Patak, the founder, he had a slab of head-cheese the size of a Baptist hymnal in his bare hand. That was his lunch.

The program brings in a variety of local personalities – WABE’s Kate Sweeney and Mastodon drummer Brann Dailor among them – who all have opinions and interests in barbeque. Why do you think so many people are so passionate about this food?

JW: If you’re from the South, you probably grew up eating barbeque.  Even if you just moved here later, like Brann Dailor, Kate Sweeney, or even our English ex-pat producer Gordon Ray, you still have to have an opinion. I can’t really say why.

We say “barbeque” like it’s a monolithic thing, all of it kind of the same. But, there are so many variables between farm and table (or “from covered in mud to covered in sauce” as the show puts it) that our tastes can diverge at any given point. Beef or pork? Organic? Ribs or butts? Pit or vault smoked? Oak or hickory?  Sweet, spicy, vinegary or mustard sauce? What sides do you want with that? By the time you eat barbecue, it might have had several points of departure from your optimal preference, or everything just might have converged for you to have that perfect barbeque meal. Not only do we all have to have opinions about barbeque, we have to have a lot of opinions, just due to the nature of the food.

For years, my sole exposure to barbeque was Wednesday night church suppers. I still judge good barbeque by how much it is not like that. But, that’s just my yardstick. Everybody has their own. It’s interesting to see what people respond to.

Jim Stacy gives out a fake email at the end, joking that he expects to get plenty of angry mail for not covering people’s favorite joints. Do you think people will be up in arms about the program?

JW: We haven’t really received any complaints about previous “Get Delicious!” specials, aside from the odd gripe here and there about crumbs of food in Jim’s beard. But, I think passions run so high when it comes to barbeque that we’re sure to get more than a few along the lines of “How could you leave out such-and-such? Everyone knows that’s the best barbeque in Atlanta/Georgia/the South.” We got plenty of those with the earlier PBA barbeque show, and given this one’s focus on newer, less traditional barbeque joints, we’re sure to anger some people who have long-time favorites. We’ve even joked about having prefab complaints that you can just print from our website and then fill out Mad Libs style.