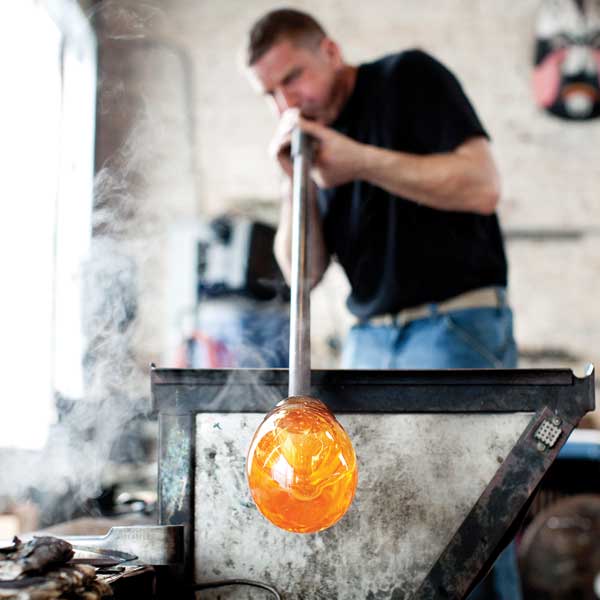 I guess I never really got over the pottery wheel love scene with Demi Moore and Patrick Swayze in “Ghost.” So when my husband mentioned casually, “Groupon is offering a half-off couples glassblowing class at Janke Studios,” I jumped right on it. Apparently that $75 deal netted Janke more than 800 new registrants, so I am not alone in my fantasies.

If you’ve ever visited Studioplex in the Old Fourth Ward (perhaps for one of Serpas’s famous hamburgers?), you’ve probably noticed the colorful gallery next to the valet station. Who knew they would actually teach you how to blow glass? The studio, owned by master glassblower Matt Janke and his wife Kim, was Atlanta’s first glassblowing center when it opened in 1996. Many of the two dozen or so glass artists now working in the metro area trained with Matt, who settle here after earning a master’s degree in the medium at Kent State.

Kim, a former Kinko’s executive, is the business side of the operation—crafting clever promotions like making Christmas ornaments or Father’s Day beer mugs. Though art glass is their passion, “we can’t feed our children on that,” says Kim. So they also produce functional and commissioned products for Atlanta designers and corporate clients. In time for SweetWater Brewing Company’s fifteenth anniversary this year, Matt constructed a nearly eight-foot-long chandelier out of 420 beer bottles.

Our date at Janke Studios really did start off romantically. A picnic basket with a red bow, along with wine and appetizers from Serpas, welcomed us to the “hot shop,” where two furnaces blared beneath a giant steel hood. (We had to sign a form that stated we’d only have one glass of wine, because we were, after all, playing with fire.) Our amiable instructor, Jamal Williams, dressed in a flannel shirt and cargo pants, hair stuffed into a knit Rasta hat, was an unlikely Cupid. But he proved endlessly patient as our hot glass oozed, dripped, and flopped into shapes not at all like the intended flowers and paperweights. Turns out it’s difficult to twirl a steel rod, remember not to touch the hot end, and use pliers to shape a blob of glass on its tip—all at the same time. But Williams tirelessly returned our poles to the “glory hole”—a 1,400-plus-degree, white-hot box—that softened up the molten globs for another try. If our session turned out more like “Saturday Night Live’s” parody of “Ghost,” at least we got wonky souvenirs.