Ten years ago, when Gina Ragsdale launched her tear-down firm, Southern Demolition & Environmental, she discovered she hated throwing things away. Soon she was selling so many recycled materials that she opened an architectural salvage store, which drew a surprising business from film crews—especially those from thrillers like The Walking Dead. (“I save stuff that looks bombed out, and they love it. It looks like the zombie apocalypse.”) But the product that really took off was salvaged bricks.

Given Georgia’s native red clay, brick is traditionally popular here, for both buildings and landscape. It’s also relatively easy to store and reuse. “My bricks don’t complain when they sit outside in the yard,” notes Ragsdale. Interestingly, she’s heard that brick on Atlanta’s midcentury ranch houses was often already recycled—for example, from commercial buildings that were destroyed by fire in St. Louis. Today’s builders earn LEED points for using such reclaimed materials.

Ragsdale expanded her market by slicing the solid blocks, becoming Atlanta’s largest supplier of genuine thin brick tiles. “They install as easily as tile and can make a wall look 100 years old in an instant,” she says. vintagebricks.com

This article originally appeared in our Spring 2017 issue of Atlanta Magazine’s HOME. 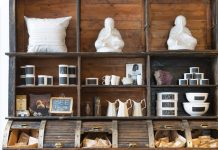 Video of the Day: Adron’s homage to Monty Python