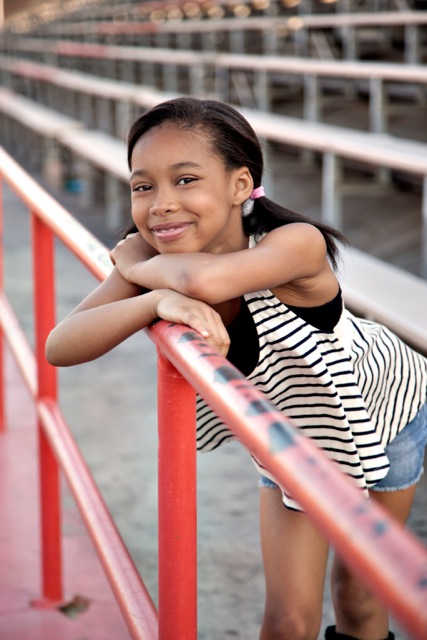 She may be but a wee thing, but she has big ambitions. Simmons grew up in Atlanta but moved to L.A. with her mom last summer to pursue her acting career—and it sounds like it was her idea (see “quadruple threat” aspirations below). Currently, she has a role in the movie Prisoners, which was recently filmed—where else?—here in the Hollywood of the South, and stars Hugh Jackman, Jake Gyllenhaal, Melissa Leo, and Viola Davis. It’s a suspense/thriller sort of flick, in which Simmons is kidnapped. She gives us the dirt on being in an R-rated movie, what the stars are like, and why she enjoyed filming in Atlanta.

I heard you were just in your hometown filming a movie called Prisoners, right?  Yes, it was awesome.

So those other actors in the movie—Jake Gyllenhaal, Viola Davis, Hugh Jackman—did you know who they were before you started filming? Yes, I knew who they were, because I watch X-Men a lot, and really, really like Rise of the Guardians, and The Help.

So tell us about what your character is like in the movie. Well, my character is Joy Birch. I am the daughter of Franklin and Nancy Birch, which is Terrence Howard and Viola Davis, and I have this big, older sister named Eliza Birch, which is played by Zoe Soul. And Joy is a shy seven-year-old who gets kidnapped. And her parents and the police are looking for her and her best friend, Anna Dover, which is Erin Gerasimovich.

So it sounds kinda like a scary movie. Yes, it’s rated R.

Whoa. Have you seen it? No, I’m gonna go see it, but no. But I want to go see it. Because I don’t know what happens.

What does your mom think about you being in an R-rated movie? I think my mom just thinks it was an honor for me to be in that movie. But kind of scary for her because I get kidnapped and all that.

When you were filming Prisoners did you get to see your old friends in Atlanta? Yes. I did, actually. I went shopping, we went to the movies, I think. I think we went to the movies. And I went over to their houses and we just talked and ate and did everything we used to do. I still have a lot of family in Atlanta. Just me and my mom moved out here.

What about school? I don’t go to regular school—I’m actually home-schooled. Online.

Was there a big premiere for the movie with a red carpet? Yes, well, actually, it was a black carpet. It was called the red carpet but it was actually black. Because it’s a dark movie.

You must have stayed up late that night. Yes. I got to go to the after-party and the red carpet. But I didn’t go see the movie, because it’s rated R, and it wouldn’t be right.

What did you wear? It was, like, a red dress—no, not a red dress!—but it was a black dress, and the bottom of it was white with stripes on it. But it was really cute. Much cuter than I’m describing it.

What are you working on right now? Well, I’m still auditioning and stuff, but I just finished actually working on How I Met Your Mother.

Who have been your favorite people to work with? Hmm, I don’t think I have one. But if I really had to choose, probably Sherri Shepherd. She’s a really nice person to work with. She actually played my mother on How I Met Your Mother. And she’s really nice, really sweet. She’s an honor to work with, just like Hugh Jackman and all these people in Prisoners. [The episode airs November 18 on CBS.]

And I know you’re a dancer, too, right? Yes, and I can sing. I really like singing Christina Aguilera, and R&B songs and pop songs, and I really like Cher.

So what do you want to be when you grow up? I want to be a quadruple threat.

Tell me more! It’s a superstar. I want to win an Oscar, I want to win a Grammy, I want to go to the MTV awards, because, guess what? I’m an actress, dancer, and singer. I’m a triple threat!