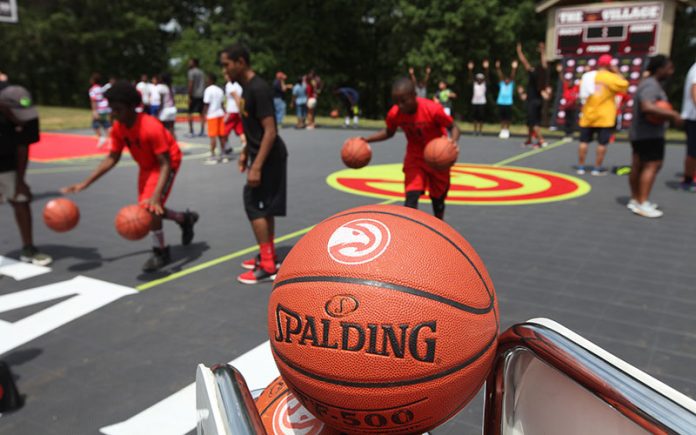 Two years ago, the Atlanta Hawks saw it was time to up their game—and not just on the court. The organization wanted to re-engage with its fans and the community at large. “We decided we needed to do things that really deliver a deep level of impact,” says David Lee, senior vice president of external affairs and executive director of the Hawks Foundation. “And we quickly came to the realization that our opportunity to improve our reach and impact is through basketball—that’s what we’re good at.”

The results of the effort have taken many forms, from improvements in basic fan experience at the game to more inclusive hiring practices within the organization to community outreach, both private and public. And in just two short years, the Hawks have managed to connect with Atlantans young and old.

One of the first moves happened internally, with the hiring of Nzinga Shaw, the NBA’s first-ever chief diversity and inclusion officer. “We needed to be proactive,” says Shaw. “The team basically gave me a blank piece of paper and gave me the freedom to create programs.” Those programs included a diversity council of people within the organization and other stakeholders throughout the city, academics, clerics, and government officials, that meet quarterly to discuss issues facing the community. “We have the luxury of living in the city of Atlanta,” says Shaw. “There are so many different types of people here. And it is the home of Civil Rights, with a history of pioneering change. There are people here who believe in this work and dedicate their lives to it. Now they are partnering with us and helping us get this work done.”

Shaw has helped revamp recruitment of employees of different backgrounds, skills, and experience. She re-examined strategic partnerships with minority- and women-owned businesses. She helped the team take a new look at in-game fan experience, providing affordable tickets and amenities at a more inclusive range of price points and recruiting a wider range of pre-game and halftime entertainment like jazz ensembles and gay men’s choir. In 2016, Shaw and the Hawks hosted the first annual Model of Shaping Atlanta through Inclusive Conversations (MOSAIC), a panel discussion on topics such and race, gender, and social action through sports. Shaw’s pioneering presence has been so successful, that the NBA has already hired its own diversity and inclusion officer, several other teams in the league have similar postings in the works, and Shaw says that the NFL and the NHL have both called her to explore the possibilities in their own corporate offices.

There are also plenty of concrete examples of the Hawks’ community impact—none more important than the Court Renovation Program. After seeing data that indicated decreasing youth participation in basketball that coincided with the economic downturn of the 2000s, the organization aimed to get Atlanta’s boys and girls back in the game. The goal is to refurbish 25 public courts in parks and neighborhoods throughout the city over the next five years. So far, eight courts have been resurfaced with a durable material, rims, backboards, and nets replaced in places like Grant Park, Cliftondale, and the William Walker Rec Center. But beyond the aesthetic improvements, the team has also set up scholarship programs for disadvantaged kids to get into team-sponsored camps and free coaching clinics to ensure that the kids’ coaches have been properly trained, not only in the fundamentals of the game, but in helping to impart the life lessons, like leadership, teamwork, and responsibility, that organized sports can provide. “We’re working to capture the hearts and minds of the current and next generation of fans,” says Lee. “We’re building bridges through basketball.”

The Hawks have their hard hats on for more than just community basketball courts. Two major construction projects—one nearly finished, the other on the way—point to an even brighter future for relationship between the city and its basketball team. In early February, a topping-out ceremony was held for the Emory Sports Medicine Complex, a 90,000 square-foot on-campus NBA practice facility that will also host the entirety of Emory University’s sports medicine and sports science and research department, including students, faculty, 24 exam rooms, and MRI and X-ray imaging equipment. “If a player needs to see someone, they walk 30 paces off the court and get a state-of-the-art MRI and get seen by the best orthopedists in the country,” says Thad Sheely, Hawks Chief Operating Officer and Executive Vice President of Real Estate. In addition to being a place of healing, Sheely says the research institute will provide a trove of data and analytics that researchers, trainers, and coaches will be able to use to avoid player injuries and even prolong an athlete’s career.

The second major brick-and-mortar project is the renovation of Philips Arena. Sheely says plans are to install new video boards, a new scoreboard, and hustle boards, along with high-tech ticket-taking and wireless internet. They will also knock down the west wall of suites in favor of a more symmetrical design with smaller, more intimate suites, loges, and theatre boxes all the way around the bowl so fans feel more connected. Below the suite level, the Hawks will install more open, connected concourses so that fans can keep track of the action while they’re getting concessions. “Twenty years ago, the concourse and the game were two different experiences,” says Sheely. “Now it’s more fluid. You want to be able to get a drink and talk to friends. We don’t want to be constrained to our seats anymore.”

Further out on the horizon, the Hawks plan to install a Developmental League team in an arena as part of an expanded Georgia International Convention Center in College Park. Sheely says the G-League squad—the recently-announced name change of the development league is the result a partnership between the NBA and Gatorade—not only helps the big-league club cultivate its future stars, but will present an additional source of professional hoops entertainment and engagement for the community. He says the minor-league team should tip off during the 2019-20 season.

Of course, the Hawks are still focused on bringing an NBA Championship to title-starved fans of this city and region. But while that victory provides a single fleeting moment of glory, these other commitments show that our Hawks are more than just a mascot for Atlanta. “What we pledge and what we are executing is year-round activity to show how important the community is to us,” says Lee. “The community is who we are. Our commitment is to not only entertain the city, but to unite it.”